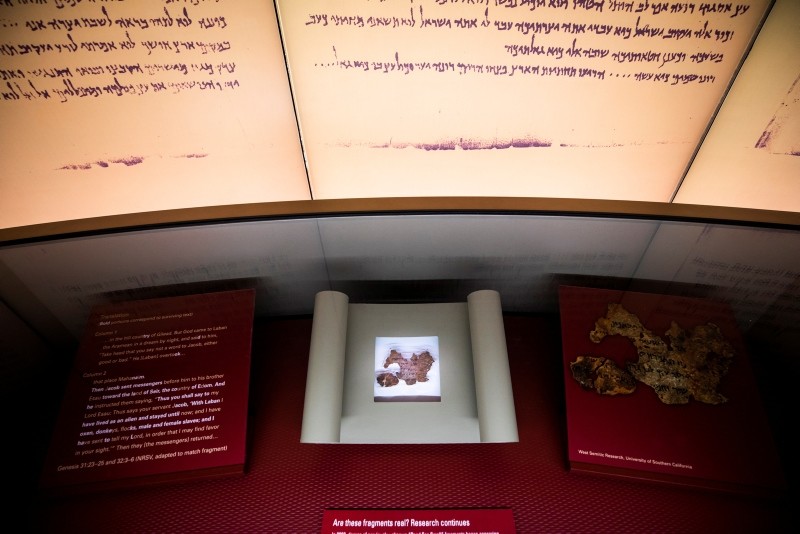 When Washington's $500 million Museum of the Bible held its grand opening in November 2017, attended by Vice President Mike Pence, there were questions even then about the authenticity of its centerpiece collection of Dead Sea Scrolls.

Now the museum has been forced to admit a painful truth: Technical analysis by a team of German scholars has revealed that at least five of the museum's 16 scroll fragments are apparent forgeries.

According to the findings of the museum's third-party analysis, the characteristics of the analyzed scrolls "do not conform to the ancient style and therefore will not be displayed in the museum."

"We had hoped the analysis would lead to different results," the museum said in a Wednesday statement, "but this is an opportunity to educate the public on the importance of verifying the authenticity of rare archaeological artifacts of biblical significance."

According to the same statement, previous examinations of certain parts of the scrolls had "raised questions regarding their authenticity".

"Initial findings of an earlier study, which were published in an academic journal last year, brought additional parts of the scrolls into question," it added.

The most recent analysis, the museum went on to assert, "casts further doubt on the authenticity of all five manuscripts [under examination]."

In April last year the museum sent five of its 16 Dead Sea Scroll pieces to Germany's Federal Institute for Materials Research and Testing (BAM) for testing after previous studies questioned their authenticity.

The museum has removed the five pieces tested in Germany from display and replaced them with three others, which are also the focus of further analysis.

The announcement has serious implications not only for the Bible Museum but for other evangelical Christian individuals and institutions who paid top dollar for what now seems to be a massive case of archaeological fraud.

Jeffrey Kloha, chief curator for the Museum of the Bible, said in a statement that the revelation is "an opportunity to educate the public on the importance of verifying the authenticity of rare biblical artifacts, the elaborate testing process undertaken and our commitment to transparency."

"As an educational institution entrusted with cultural heritage, the museum upholds and adheres to all museum and ethical guidelines on collection care, research and display."

The scrolls are a collection of ancient Jewish religious texts first discovered in the mid-1940s in Qumran Caves on the western shore of the Dead Sea in what is now Israeli-occupied West Bank. The massive cache of Hebrew documents is believed to date back to the days of Jesus. With more than 9,000 documents and 50,000 fragments, the entire collection took decades to fully excavate.

Israeli daily Yedioth Ahronoth reported Wednesday that the claims, if confirmed, would represent "one of the biggest scandals in recent years."

Most of the scrolls and fragments are tightly controlled by the Israeli Antiquities Authority. But around 2002, a wave of new fragments began mysteriously appearing on the market, despite skepticism from Biblical scholars.

These fragments, they warned, were specifically designed to target American evangelical Christians, who prize the scrolls. That appears to be exactly what happened; a Baptist seminary in Texas and an evangelical college in California reportedly paid millions to purchase alleged pieces of the scrolls.

The Museum of the Bible raised eyebrows even before opening its giant bronze, Latin-inscribed gates: its primary financial backer is billionaire Steve Green, whose arts and crafts chain Hobby Lobby has supported conservative causes in Washington.

Also eagerly buying up fragments was the Green family — evangelical Oklahoma billionaires who famously sued the Obama administration on religious grounds, saying they didn't want to pay to provide their employees access to the morning-after pill or intrauterine devices.

The Greens are the primary backers of the Museum of the Bible and went on an archaeological acquisition spree in the years leading up to the museum's opening. In addition to the alleged Dead Sea Scrolls fragments, the Greens ran afoul of the Justice Department, which said they had acquired thousands of smuggled artifacts looted from Iraq and elsewhere. The family agreed last year to return 5,500 artifacts, including ancient clay cuneiform tablets from Iraq, and pay a $3 million settlement for illegal imports.

At the opening Green, who chairs the museum's board, said the institution aims only to "present the facts."