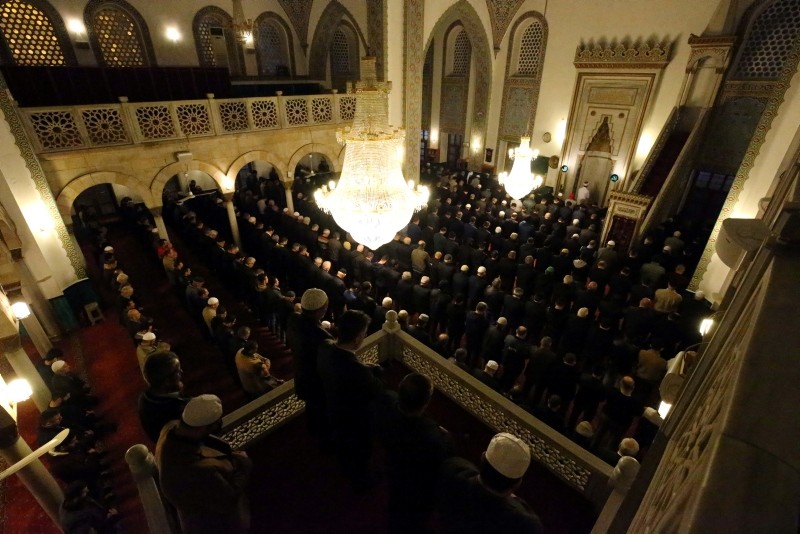 Millions in Turkey joined Muslims throughout the world Monday to mark the Mawlid al-Nabawi, the celebration of the birth anniversary of Prophet Muhammad, a day of spiritual significance in Islam.

Muslims of all ages flocked to mosques to pray and recite poems dedicated to the prophet on the occasion known as Mawlid al-Nabawi.

On this sacred night, Muslims say their prayers and read the Holy Quran in their homes and mosques.

President Recep Tayyip Erdoğan, in a Twitter post, said he was celebrating Turkey and the entire Islamic world's Mawlid al-Nabawi, wishing well to all humanity.

"I am thinking of our beloved Prophet Mohammad with the highest manners, the prophet of mercy, the oppressed and the poor," he wrote.

"We remember today our beloved prophet, who has been sent to humanity as messenger and advisor," said Parliament Speaker Binali Yıldırım in a statement.

"We should work to dominate our lives with goodness and kindness," he added.

Ali Erbaş, head of Turkey's Presidency of Religious Affairs, issued a message congratulating the Mawlid of all citizens.

Erbaş said with the birth of Prophet Muhammad, humanity regained its lost morals and values.

"Today, if mankind meets the values that he has brought, humanity will find peace," he said.

The top cleric said Muslims should introduce the Islamic principles of kindness, mercy, fairness, good morals and coexistence to the world which is struck by wars and conflict.

Muslims across the world celebrate the 12th of Rabi-ul-Awwal, with the day varying from country to country according to the lunar calendar. The prophet passed away on the same day as that of his birth, at the age of 63.

The day is a public holiday in several Muslim-majority countries, including Pakistan, Indonesia, Malaysia, Bangladesh and some parts of India.

In Indonesian capital Jakarta, thousands of people gathered in a commemoration program held in the Monas National Monument after the isha prayer.