A new app to ease crowds at Jesus' birthplace 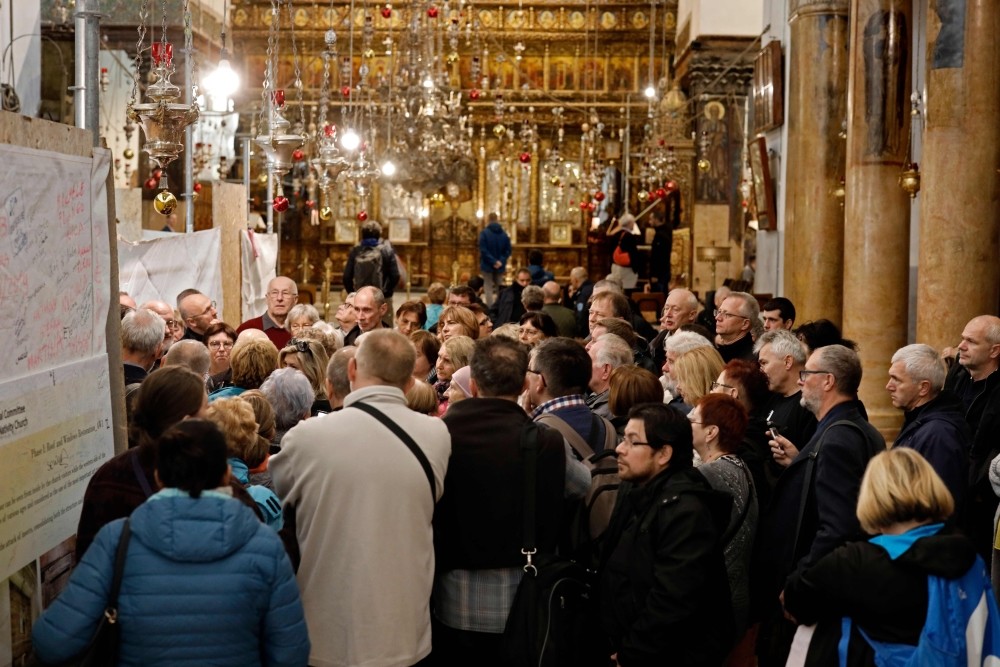 A group of tourists and pilgrims visit the Church of the Nativity, the place where Jesus is said to have been born, in the occupied biblical West Bank town of Bethlehem.
by Dec 22, 2018 12:00 am

Bethlehem is buzzing, with more tourists expected this Christmas than have visited the Biblical city in years, causing the kind of problem that modern technology was almost born to deal with.

Such are the crowds at the church built on the site where Jesus is believed to have been born that the authorities are planning to introduce an advance reservation system through an app.

The app, which will be introduced early next year, is aimed at ensuring a regular flow of tourists at the Church of the Nativity, where at busy times visitors wait hours to see the underground grotto where Christians believe Jesus was born in a manger.

Details of the app, which will be in English to start, are still being worked out.

One priest said it would only apply to tour groups visiting the site in the Israeli-occupied West Bank, but the Palestinian tourism ministry said it would be for everyone.

While there are concerns visits could become unnecessarily complicated, the three churches that share control of the site - the Catholics, Greek Orthodox and the Armenian Church - say such an app is needed.

"There are times when for us there are specific prayers, celebrations, or masses, or with all the sects praying," Orthodox priest Issa Thaljieh said outside the church.

"So of course there is a huge squeeze. With the app, everyone will know what time to enter and which groups are there, so it will become more organized."

The first church was built on the site in the fourth century, though it was replaced after a fire in the sixth century. Its mosaics were recently restored in a major project.

"We are going digital with this issue," he told Agence France-Presse (AFP) in his office in Bethlehem.

Barbora Salyova, a 29-year-old tourist visiting Israel and Jordan from Slovakia, said the app could be useful for pilgrims like herself.

"This is a step we definitely planned to make," she said. "We also came for religious reasons so this was an automatic stop."

Tourism in Bethlehem is enjoying its best season in years, with hotels reporting especially high occupancy rates for the Christmas period, said Elias Al-Arja, chairman of the Hotels Association Palestine.

In total around 2.8 million tourists have visited th

e Palestinian territories this year, up from 2.5 million last year, according to the tourism ministry.

Abu Srour said the primary reason is a decrease in violence in Jerusalem and the West Bank this year.

The ministry has reached out to new tourists in locations across the globe, he said. Israel is also enjoying record tourism figures and many visitors take day trips to Bethlehem and other West Bank sites from Tel Aviv, Jerusalem and elsewhere in the Jewish state.