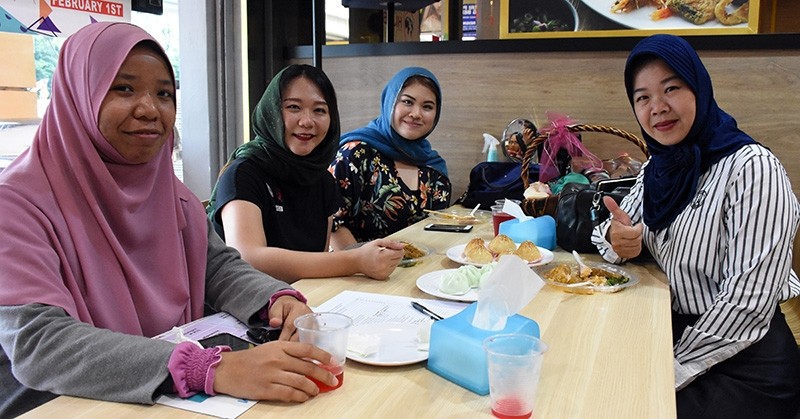 World Hijab Day, an initiative to encourage women of all religions and backgrounds to support Muslim women who wear the headscarf by donning one for the day, is being marked around the world on Friday.

World Hijab Day (WHD) was first marked in 2013, and became a nonprofit organization four years later with a mission to fight discrimination against Muslim women who wear the headscarf through awareness and education, according to its official webpage.

WHD is inviting women to show their solidarity by wearing a headscarf and joining the online conversation using the hashtags #FreeInHijab and #WorldHijabDay on Friday.

"#FreeInHijab is the much needed hashtag for our current global situation where women in the hijab are labeled by the media as oppressed and symbolically imprisoned," Nazma Khan, the founder of the annual event, had previously told Anadolu Agency.

"Through this hashtag, women are encouraged to voice their choice of wearing the hijab; thus dispelling common misconceptions," Khan said.

Here's a look at how World Hijab Day is being marked across Asia and Africa:

Malaysian women from various religious and ethnic backgrounds celebrated WHD with a special event in the capital Kuala Lumpur on Friday.

Women shared their experiences and stories about reactions they got from their families and community when they start wearing headscarves.

At the end of the event, three Muslim and non-Muslim women were recognized with awards.

"I believe women should support each other whatever their circumstances. Hijabi women need to be heard. As a non-Muslim woman, I want to be part of it," Bkay Nair, one of the honorees, told Anadolu Agency.

Nair also said wearing a hijab for even a day to support the campaign made her friends act differently, adding: "But finally, my family and close friends understand the reason behind my support."

In the central African country of Nigeria, various Muslim bodies said girls' right to education is being curtailed as officials either shut them out of schools because they wear headscarves or taunt and punish them for their beliefs.

Nimatullah Abdul-Quadri, head of the Al-Mu'minaat, or the Believing Women, told a news briefing in the commercial capital Lagos that the past year has seen a rise in discrimination against women and girls wearing the headscarf.

She said the discrimination persists despite a 2016 appeals court ruling which struck down an official policy restricting the headscarf in public schools or anywhere.

In what is seen as a challenge to the British colonial legacy, Nigeria has seen a spike in headscarf-related crises across the religiously mixed southwest region in the last three years, especially in the Lagos, Ogun and Oyo states, where Muslims have mounted protests and legal challenges to end "conspiracies" to stop young women from wearing the headscarf to school.

"We call on the Nigerian government at all levels to act quickly and direct all its agencies to stop unwarranted discrimination against Muslim girls in hijabs," said Abdul-Quadri.

Mutiat Orolu-Balogun, head of the Hijab Rights Advocacy Initiative, told a news briefing on Friday that the discrimination cuts across all sectors of the country, citing cases of Muslim women medical workers who face exclusions on account of their head covering.

She said Nigeria ranks among the top five countries where Muslim women are stereotyped for their faith.

"We intend to carry out a monthlong advocacy to reach as many members of society as possible," she said, calling for fair representation and respect for Muslim women in every sector of society.

In Kenya, East Africa, Muslims on social media have been outraged over a recent court ruling which upheld a ban on headscarves.

"Many students are staying away from schools, missing out on education because of such a ruling," Abu Ayman, a Muslim leader at the Jamia Mosque in the Kenyan capital Nairobi, told Anadolu Agency.

"It could be better if we came up with more Muslim schools to support these children. We never discriminate, and the Muslim schools in Kenya admit Christians and other religious groups. Above all, we respect their religion."

"Today is a sad day for us Muslim girls," 21-year-old Mariem Halima told Anadolu Agency. "As we speak, there is a girl somewhere at home missing education because of discrimination by our courts and countrymen."

Some Christian leaders in Kenya have condemned the headscarf ban in their country.

On Sunday in Johannesburg, South Africa, a major talk centering on the wearing of Muslim headscarves will be held.

WHD founder Khan said her motive in creating the day was the hardships she faced due to her headscarf while growing up in New York City.

"I was constantly bullied in middle school and high school. Discrimination rose to a new level after 9/11," she said, recalling the Sept. 11, 2001, attacks in the U.S.

Khan said there have been many milestones in the past five years, one of them being the recognition of the WHD by New York State in 2017.

In 2018, the Scottish Parliament hosted a three-day exhibition to mark the day, and the Philippines took steps to declare Feb. 1 as a national day.

The overall mission of WHD is to create a more peaceful world where global citizens respect each other, the organization said in a statement on Jan. 20.

"Particularly, WHD focuses on fighting bigotry, discrimination and prejudice against Muslim women. This is most crucial in these times where hijab is being banned in some countries while in other countries, Muslim women are being targeted and harassed verbally and physically," the statement said, citing examples of attacks or forms of oppression and discrimination that Muslim women wearing a headscarf have experienced around the world.