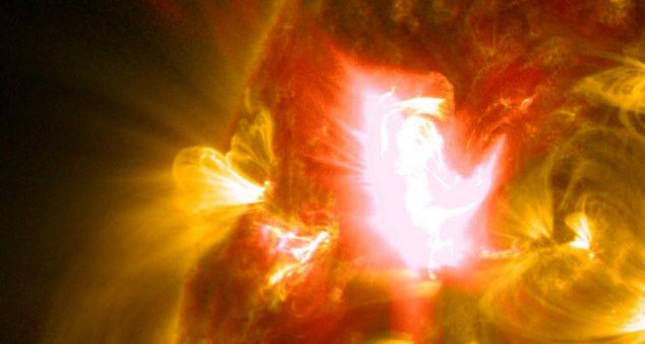 by Anadolu Agency Apr 07, 2014 12:00 am
WASHINGTON — NASA has unveiled incredible footage of what it describes as a 'graceful' solar flare erupting from the sun's surface.

The mid-level solar flare erupted on Wednesday April 2, peaking at 2:05pm GMT (10:05am EDT) with NASA's Solar Dynamics Observatory capturing the event. However, when intense enough, they can disturb the atmosphere in the layer where GPS and communications signals travel.

Solar flares are powerful bursts of radiation from the sun. This particular flare, classified as an M6.5 flare, is not thought to have caused significant disturbance on Earth. M-class flares are ten times less powerful than the most intense flares, which are labelled X-class.


Earlier this month, scientists came a step closer to understanding this powerful phenomenon behind solar flares by witnessing, for the first time, the mechanism behind it.

Footage put together by an international team led by University of Cambridge researchers showed entangled magnetic field lines looping from the sun's surface. These magnetic lines slip around each other and lead to an eruption 35 times the size of the Earth and an explosive release of magnetic energy into space.

The discoveries of a gigantic energy build-up have brought scientists a step closer to predicting when and where large flares will occur.