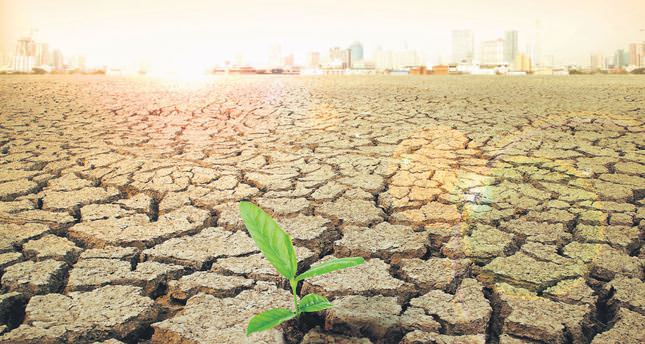 by Nur Özdil Jun 05, 2014 12:00 am
Recent floods, alarming water levels in lakes and dry winter seasons are on the agenda of scientists. The third Istanbul International Water Forum addressed the necessary precautions against water scarcity across the globe. The world is being hit by heavy rains and floods. The Balkans suffered from the worst flooding over the last 120 years. U.K. officials announced severe flood warnings in the Thames River, which reached record levels in April. Turkey's Çorum and Gaziantep provinces were also hit by heavy rains. More recently, daily life was disturbed by rain storms in Istanbul. The imbalances in weather conditions are predicted to only get worse in the near future.

The world, on the other hand, is facing a serious water scarcity due to population growth, desertification and unsustainable water consumption followed by increasing urban mass and industrial activities. It is foreseen that one out of every 10 people will be put at the risk of water scarcity by the end of the 21th century. At present, one out of every 15 people is confronted with the same problem.

In the light of alarming water levels in dams and lakes, agricultural life has entered into a hazardous period in Turkey. The 3rd International Water Forum dealt with the urgent actions and water issues around the world. The Turkish Forestry and Water Affairs Ministry hosted the conference between May 27 and 29 at the Haliç Congress Center. With the participation of Forestry and Water Affairs Minister Veysel Eroğlu and international scientists, the forum's main subjects were water safety and international water law.

The Istanbul International Water Forum is organized every three years by the Turkish Water Institute, a think tank under the Ministry of Forestry and Water Affairs, one year before the World Water Forum. Articles from the forum will be published in the International Water Resources Association's magazine "Water International." Speaking at the opening ceremony of the third Istanbul International Water Forum, Eroğlu said that it is critical for states to provide healthy water to their citizens. "One-third of the world's population does not have adequate water," Eroğlu said. Remarking that Turkey's governmental institution for international development, the Turkish Cooperation and Development Agency (TİKA), is present in African countries, Eroğlu said, "Last year, we initiated a mobilization program through TİKA for $2.5 billion in Africa alone, through which we provide water." Eroğlu also called for the establishment of a fund to support access to water in disadvantaged countries, saying, "This should be raised in the upcoming seventh World Water Forum."

Benedito Braga, president of the World Water Committee, said that access to clean water is a human right and of great importance.
The three-day forum discussed issues of climate change, the water-food-energy-ecology nexus, water governance and integrated basin management.

Other subjects included the right to water and sanitation, national water laws, trans-boundary water cooperation and legislation on protection of water resources. Chaired by different moderators, the event welcomed leading international water experts. Apart from the thematic sessions, there were a series of panels with the participation of international institutions and organizations. A special area was allocated for exhibitions and stands at which water companies introduced their services and related products. The forum was ended with a technical visit to the Ambarlı Advanced Biological Wastewater Treatment Plant rendering service for 1.6 million people and the İkitelli Water Treatment Plant offering drinking water for 5 million citizens in Istanbul. Organized by the Turkish Water Institute, the forum ended with significant contributions for the seventh World Water Forum to be held in the Republic of Korea in 2015.

According to the U.N., 85 percent of the world population lives in the driest half of the planet. 783 million people do not have access to clean, drinkable water, and almost 2.5 billion do not have access to adequate sanitation. Between 6 and 8 million people die annually due to lack of drinkable water from disasters and water-related diseases.
RELATED TOPICS