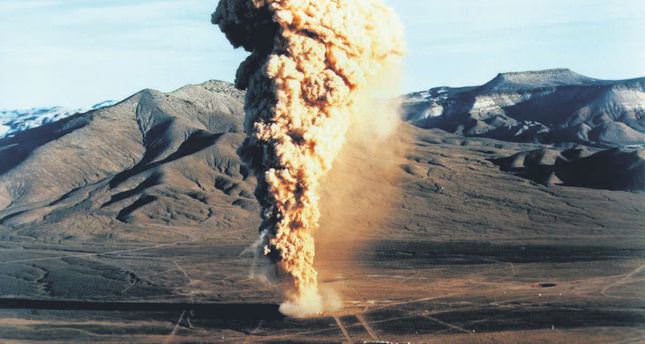 For the first time a Turkish scientist has been appointed as a director of the Comprehensive Nuclear-Test-Ban Treaty Organization's international monitoring branch. Prof. Nurcan Meral Özel, who has lectured at the Department of Geophysics, Kandilli Observatory and the Earthquake Research Institute at Bogazici University in Istanbul, was chosen for the International Monitoring System post on August 21 - among 124 candidates from across the world.

The organization was set up in Vienna, Austria in 1996 in order to build up the verification regime of the Comprehensive Nuclear-Test-Ban Treaty to help ensure its entry into force as well as to promote its universality. Speaking to a Anadolu Agency correspondent in Istanbul, Özel said: "I am very proud of being appointed as a director of this organization on behalf of Turkey. I am very excited and happy." The International Monitoring System as a worldwide network of observational technology - aims to help verify compliance with and detect and confirm violations of the treaty.
The treaty bans nuclear testing everywhere whether on land, in the atmosphere, underwater or underground and has been signed by 183 countries and ratified by 162 so far -- including Turkey in 2000. China, Iran, Egypt, India, Israel, North Korea, Pakistan and the U.S. have yet to sign up. "Muslim countries were very happy when they learned that I was chosen -- during a special session of the U.N.," the Turkish professor said. "The Iranian delegation at the session expressed their pleasure saying that they would never image that a woman from a Muslim country would be appointed to that position." The organization has nuclear test monitoring stations in 89 countries. Turkey also hosts a station in Belbasi, Ankara, one of the oldest stations, founded in 1951 to monitor nuclear tests. According to the organization data, the history of nuclear testing started in July 1945 at a desert site in New Mexico in the U.S. when the country set off the first atomic bomb. Between the dates of 1945 (when the U.S. bombed Hiroshima and Nagasaki) and the first signature of the treaty in 1996, more than 2,000 nuclear tests were performed around the world. The leading country in undertaking nuclear tests is the U.S. with 1,032 incidents between 1945 and 1992. The U.S. is followed by the Soviet Union, which made around 715 tests between 1949 and 1990.

The U.K., France and China have also repeatedly conducted tests. North Korea conducted its latest nuclear test in February 2013. The country, which also held many tests between 2006 and 2009, claimed in January last year that it would conduct further tests to include rockets and nuclear warheads capable of striking the U.S. Turkish National Data Center evaluated the North Korea's test on 25 May, 2009, under Belbasi Nuclear Monitoring System. Iran also claims its nuclear program is purely for civilian use but others, particularly the U.S. and Israel, fear Iran is enriching uranium for a weapons program. The nuclear talks between the P5+1 and Iran started last year in Geneva and parties agreed on a joint plan of action for a sixmonth period of negotiations. However, parties did not reach an agreement and the deadline for negotiations was extended. The talks have been running since last November.