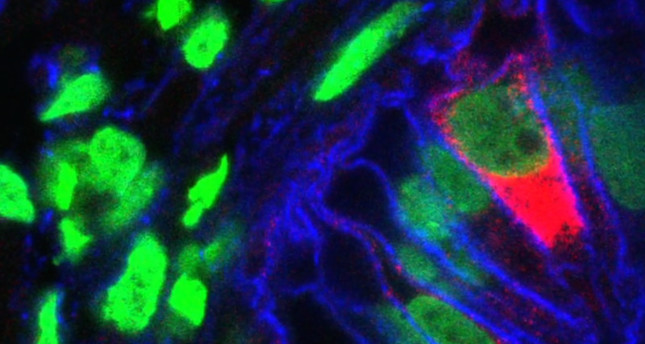 Many important scientific breakthroughs took place around the world this year, from producing three-dimensional human stomachs to graphene-based flexible displays

Professor Ural Akbulut of Middle East Technical University's (METU) Department of Chemistry collected the 10 most important developments of 2014 in the fields of technology, medicine, physics, chemistry and electronics from international scientific publications such as Science or Nature.

1. Jim Wells, a professor of developmental biology and endocrinology at the University of Cincinnati used pluripotent stem cells to produce three-dimensional human stomach tissue in the laboratory. His team generated mini-stomachs to examine the infection caused by H. pylori bacteria, a major cause of peptic ulcers and stomach cancer, which do not develop in animals.

2. Neurons from reprogrammed skin cells were implanted into the brains of mice at the Luxembourg Centre for Systems Biomedicine (LCSB) of the University of Luxembourg. Professor Jens Schwamborn and Kathrin Hemmer's study shows that the neurons were successfully integrated into the brain after six months of the implantation. The functional implantation of neurones might pave the way to replace sick neurones with healthy ones among patients with Parkinson's disease; however, it will presumably take time to implement in clinical trials with humans.

3. Physicists of the Australian National University produced a tractor beam that can repel and attract objects through a hollow laser beam. The study was overseen by Professor Wieslaw Krolikowski who announced that the first long-distance optical tractor beam can move particles 0.2 millimeters in diameter, a distance of up to 20 centimeters, about 100 times further than previous attempts. The energy of the laser heats up the particles and the air around them.

4. Scientists at the Bioengineering Laboratory of Stanford University produced a new circuit board based on the human brain that can process information 9,000 times faster than a PC. Consisting of 16 special "neurocores," the system known as "Neurogrid" and designed by Kwabena Boahen cost $40,000. It can simulate one million neurones and billions of synaptic connections. Scientists say the system will be used to control prosthetic limbs for paralyzed people in the future.

5. Amin Arbabian, an assistant professor of electrical engineering at Stanford University designed ant-sized radios placed on a tiny microchip that can work without batteries. Arbabian began the project in 2011 and attempted to shrink the size of its components. However, he realized that he was unable to reduce the size of the battery and attempted an innovative way to run it without batteries: By gaining the necessary power from the same electromagnetic waves that carry signals to its receiving antenna. The radio is not used for communication, but computes, executes and relays commands between the Internet and smart devices.

6. Biomedical engineers at Cornell University destroyed metastasizing cancer cells by attaching a cancer-killer protein. It is possible to treat primary tumors through surgery and radiation, yet scientists said it is still difficult to destroy metastatic cancer cells circulating throughout the bloodstream.

7. Chemist Tom Mallouk and colleagues of Penn State University took a major step in cancer treatment by designing tiny gold-ruthenium nanomotors that were placed inside live human cells in the laboratory. The nanomotors were propelled and steered with ultrasonic waves, and Mallouk now marks his name as the first scientist who produced nanomotors that can move in live cells. His study demonstrates how cancer cells may be eliminated without harming healthy cells.

8. Graphite is essentially composed of hundreds of thousands of layers of grapheme, which was not widely known until it was discovered at the University of Manchester in 2004. The finding was an important development in the field of nanotechnology and in the production of micro electronic materials. This year, the Cambridge University Graphene Centre introduced the first graphene-based flexible display. The study demonstrates that "graphene is more flexible than conventional ceramic alternatives like indium-tin oxide (ITO) and more transparent than metal films." Professor Andrea Ferrari, the center's director, said, "This is a significant step forward to enable fully wearable and flexible devices."

9. Chemist Tom Mallouk and colleagues of Penn State University took a major step in cancer treatment by designing tiny gold-ruthenium nanomotors that were placed inside live human cells in the laboratory. The nanomotors were propelled and steered with ultrasonic waves, and Mallouk now marks his name as the first scientist who produced nanomotors that can move in live cells. His study demonstrates how cancer cells may be eliminated without harming healthy cells.

10. Chris Tinney, an astronomer at the Australian Centre for Astrobiology at the University of New South Wales, along with three American researchers discovered water ice clouds beyond the solar system at Las Campanas Observatory in Chile. A NASA spacecraft previously detected water ice crystals in the atmosphere of a brown dwarf named W0855. The existence of brown dwarfs has been known since 1995, yet they are not recognized in the class or either stars or planets.