US astronaut Kelly, Russian counterpart Kornienko blast off for one year trip to space station 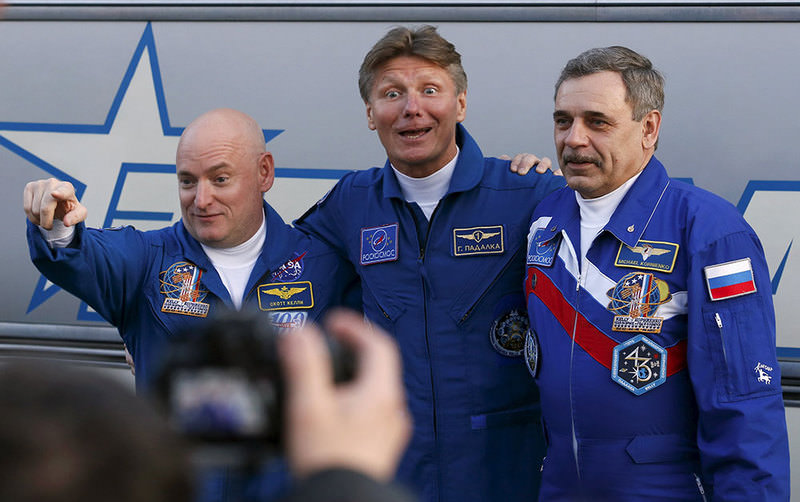 by Mar 27, 2015 12:00 am
A Russian Soyuz spacecraft carrying three crew, including a US astronaut and a Russian cosmonaut who will be the first to spend an entire year on the International Space Station, blasted off on schedule Friday, Russian mission control said.

The Soyuz-TMA16M spacecraft took off from Russia's Baikonur cosmodrome in Kazakhstan and is headed for the International Space Station. "The flight is normal," mission control said seconds after the launch.

"A successful launch of the Soyuz-FG rocket was carried out at 22:42 pm Moscow time (1942 GMT) to take the Soyuz TMA-16M manned spacecraft into orbit," Russia's space agency said in a statement on its website.

NASA flight engineer Scott Kelly and Russian Mikhail Kornienko will together spend a total of 342 days aboard the ISS, while the third crew member, Russian cosmonaut Gennady Padalka, will spend the usual period of six months.

51-year-old Kelly and 54-year-old Kornienko will take part in the extended mission to test the effects of long-term space missions on the human body.

The trip marks the longest amount of time that two people will live continuously at the ISS, though a handful of Russian cosmonauts spent a year to 14 months at the Russian space station Mir in the 1990s.

Kelly and Kornienko, both of whom have flown multiple missions to orbit and have each previously spent about six months on the ISS, are set to stay on the space station until March 2016.

Three crew members -- Russian Anton Shkaplerov, Italian Samantha Cristoforetti and American Terry Virts -- are currently onboard the space station, due to leave in May.

The arriving crew members are due to coincide with the first space tourist since 2009, British soprano Sarah Brightman, who has paid $52 million for her 10-day stint planned to start on September 1 and has said she will perform in space.

"We'll sing together," Kornienko pledged at a news conference ahead of the launch.

Space exploration remains a hugely symbolic area of cooperation between Russia and the US despite the freeze in relations over Russia's alleged actions in Ukraine.

Russia last month confirmed that it will continue using the International Space Station in partnership with NASA until 2024, after threatening to pull out and stop financing it in 2020.