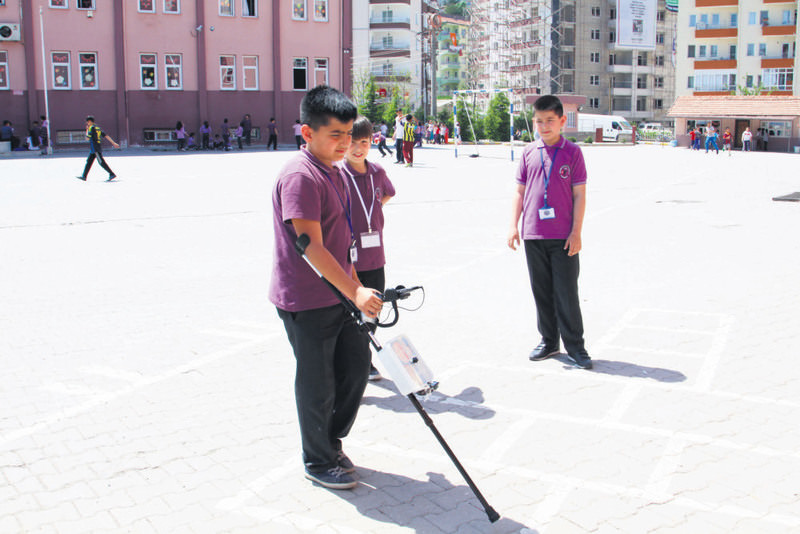 by Daily Sabah with AA May 27, 2015 12:00 am
Fifth grade students Berat Karaca, Salih Çimenoğlu and Ekrem Haktanıyan of Çankırı Mehmetçik Middle School have invented a smartcane featuring navigation for the blind to present at the Scientific and Technological Research Council of Turkey- (TÜBİTAK) organized Science Fair. The students used sensors, a cellphone and a battery to help the visually-impaired go wherever they want.

Speaking to Anadolu Agency (AA), Karaca said they are working to eliminate barriers for the disabled and expressed his happiness as they have achieved this with their cane. "A visually-impaired person determines their location with the voice-guided navigation system on the cellphone. A sensor placed at the end of the cane warns them about obstacles. They choose the destination to which they want to go on the phone and the navigation system instructs them as to what direction they should go. An alarm is triggered when the person approaches an obstacle."

Karaca added that their friends also liked their project and said they began working on the smartcane as soon as they decided on the idea. "The project did not cost us muc, as we supplied most of the equipment that we used for the cane," he said, adding that thr project can be greatly improved if it is supported both technically and financially.Çimenoğlu said he believed they invented a useful device for the blind. He said they began their project when they decided to apply for the TÜBİTAK Science Fair. "Blind people experience difficulties when walking on the streets. Some hit cars, some hit electric poles. All these things upset us deeply. I believe this cane will make life easier for blind people." At that point, Haktanıyan stressed that they worked for five days to make the smartcane.

Speaking to Daily Sabah, the secretary of the Altınokta Visually-Impaired Association's Istanbul branch, Yüksel Başkesen, said these kinds of innovations are not appropriate for those living in metropolises. "In Istanbul, as it has more than 14 million people, this kind of device cannot be useful for a visually-impaired person. The device's sensor will probably always make sounds while walking because there are different objects, people and cars, everywhere in this busy city. We have non-electronic white canes that help enough with walking. If someone wants to develop that kind of device, it should focus on the main problem for us while walking – signboards. A visually-impaired person doesn't have the chance to recognize these kinds of objects. If it would be a sensor attached to the waist and adjustable according to height, it could alert the person when these signs are around. That would be useful," he said.
Last Update: May 27, 2015 9:50 pm
RELATED TOPICS