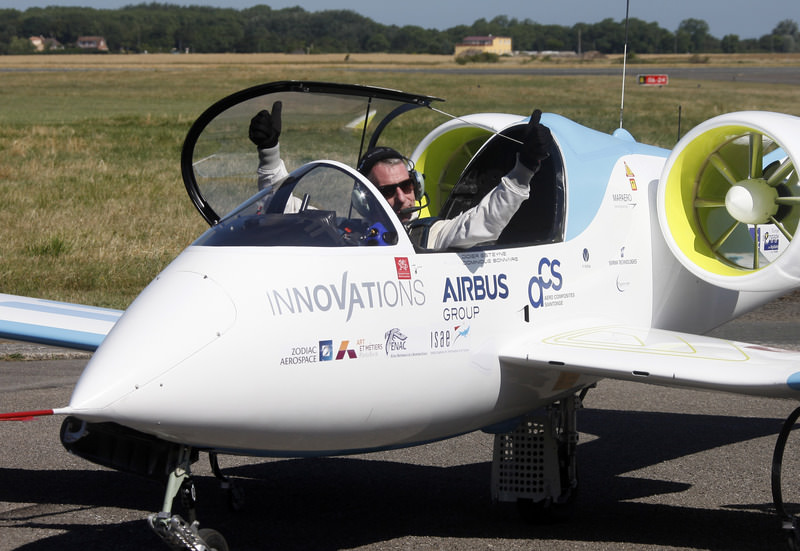 | AP Photo
by Associated Press Jul 11, 2015 12:00 am
The E-fan electric plane of European planemaker Airbus has made history by being the first battery-operated electric plane to fly over the English Channel.

Flying from Lydd, England, to Calais, France, on Friday morning, the environmentally-friendly plane which operates on batteries only, uses no oil or water. Thanks to that feature the 20-foot long, 1300-pound jet releases absolutely no emissions.

Several companies in different countries are trying to develop electric planes in hopes of offering a fuel-free and emissions-free flight alternative for the future.

On Thursday night, pilot Hugues Duval flew from Dover, England, to Calais on a two-engine, one-seat Cricri plane, which weighs about 100 kilograms (220 pounds). He said reached 150 kilometers (90 miles) an hour on his 52-kilometer (31-mile) journey.

Duval told The Associated Press that his successful flight was a "relief" and an "important moment" after years of developing the plane and flying it over land.

Airbus' E-fan took its maiden voyage in March 2014, and has taken off 100 times since, its latest at Paris's International Air Show last month. Airbus aims to put the two-seater on the market in 2017, targeting sales at training facilities for entry-level pilots.

The choice of flight path was not coincidental: In 1909, French pilot Louis Bleriot was the first person to fly a plane across the English Channel.

Safety was of secondary priority for Bleriot he was concentrated on winning a 1000 pounds in prize money from the British Daily Mail newspaper by performing the feat first.

For Airbus' flight Friday, security professionals were out in full force, with helicopters and rescue speed boats trailing the E-fan.

Electric flight is a nascent sector of the aviation industry, so safety regulations for planes like the E-fan are still in development. Airbus and the French Direction of Civil Aviation worked together to create a test flight program for the jets.

While the E-fan only seats two for now, the aircraft manufacturer is aiming bigger down the line. Chief Technical Officer Jean Botti told The Associated Press at the Paris Air Show last month, "Our objective here is to make a hybrid-electric hundred seater for the future," calling it an ambition Airbus could realize in the next 15 years.