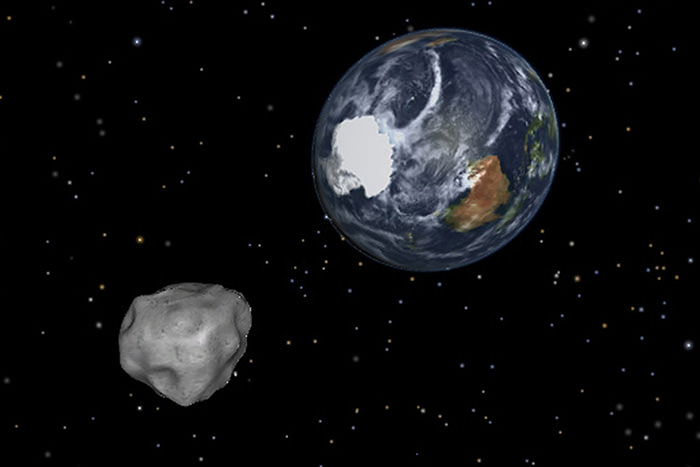 Photo shows simulation of asteroid 2012 DA14 approaching from the south as it passes through the Earth-moon system on Friday, Feb. 15, 2013
by Daily Sabah Jul 20, 2015 12:00 am
Astronomers have claimed that a huge asteroid named Asteroid UW-158, which was set to pass by earth on Sunday night, contains a platinum core worth $5 trillion.

Asteroid 2011 UW-158, is claimed to have platinum and other precious metals and materials worth any where from $300 billion to $5.4 trillion, Slooh, a community observatory website, which also showed the passage of the asteroid live said.

"The size, composition, and orbit of 2011 UW158 have gained it a place on the short list of asteroids that might make a good target for robotic mining missions in the near future," Slooh said.

Nasa has also said that "It is not presently cost effective to mine these minerals and then bring them back to Earth. However, these raw materials could be used in developing the space structures and in generating the rocket fuel that will be required to explore and colonize our solar system in the twenty-first century."
Last Update: Jul 20, 2015 1:25 pm
RELATED TOPICS