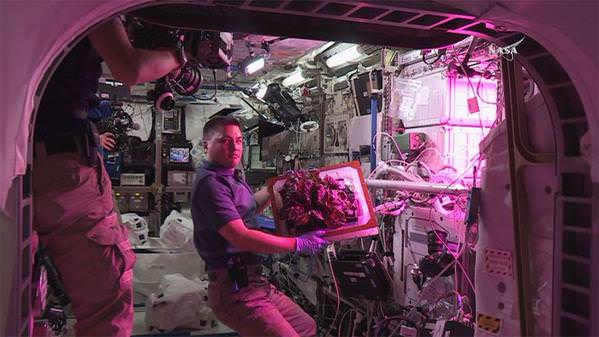 If space explorers can grow their own food while they are away from the Earth, they are more likely to survive the rigors of deep space exploration lasting months or even years, according to NASA.

"There is evidence that supports (the idea that) fresh foods, such as tomatoes, blueberries and red lettuce, are a good source of antioxidants," said Ray Wheeler, NASA's lead scientist for advanced life support activities at Kennedy Space Center in Florida.

"Having fresh food like these available in space could have a positive impact on people's moods and also could provide some protection against radiation in space," he added.

US astronaut Scott Kelly and other crewmen at the orbiting outpost will taste the lettuce between 11:15 am and 12 pm (1515-1600 GMT), a NASA spokeswoman told AFP.

The event will air on NASA television, which will take a short break in its coverage of a Russian spacewalk in order to broadcast the historic bites.

The red romaine lettuce was grown in a special plant-growing box called Veg-01, and was flown to space aboard the SpaceX Dragon cargo ship.

The seeds are contained in rooting pillows, and were "activated" by Kelly on July 8, NASA said. The plants grew for 33 days before being harvested.

"Tomorrow we'll eat the anticipated veggie harvest," Kelly posted on Twitter on Sunday, along with a picture he took of himself beside the red-lit veggie station.

A previous crop of lettuce was grown in space last year but was not eaten by astronauts. Instead, it underwent -- and passed -- food safety tests back on Earth.

This time, the astronauts "will clean the leafy greens with citric acid-based, food safe sanitizing wipes before consuming them," NASA said on its website.

"They will eat half of the space bounty, setting aside the other half to be packaged and frozen on the station until it can be returned to Earth for scientific analysis."