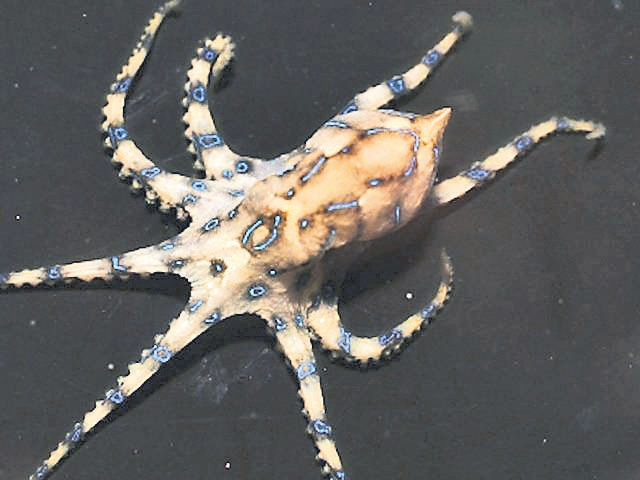 by Will Dunham Aug 14, 2015 12:00 am
Scientists have unlocked the genetic secrets of one of Earth's underwater wonders - the octopus - whose eight sucker-studded arms bestow an otherworldly appearance and large brain place it among the smartest invertebrates.

Researchers on Wednesday unveiled the first complete genome of an octopus or any species of cephalopod, the class of mollusks also including squid, cuttlefish and nautiluses.

"They can camouflage themselves with skin that can change its color and texture in the blink of an eye. They have eight prehensile, sucker-lined arms that they can use to grasp, manipulate and even, strangely enough, taste objects, as well as complex, camera-like eyes, and large, elaborate brains that allow them to be active predators with complex behaviors."

The researchers sequenced the genome of the California two-spot octopus (scientific name Octopus bimaculoides), a relatively small, gray-brown species with two iridescent blue spots on each side of its head. It dwells off Southern California's coast.

Its genome was large, nearly the size of the human genome and much bigger than those of other sequenced invertebrates such as flies, snails or oysters.

Among its roughly 33,000 genes, some 3,500 are found in no other type of animal, with many of these octopus-specific genes active in the brain, suckers, retina and in camouflage ability.

The genome was arranged differently than in other invertebrates and featured an expansion in a family of genes regulating nerve cell development that previously was thought to be enlarged only in vertebrates.

Octopuses are carnivorous, ripping prey with a hard beak, and can employ venom while hunting. They also can regenerate lost limbs and squirt dark ink to elude predators.

"We can now explore the molecular mechanisms of the octopus' unique development and its complex behaviors, and get a better understanding of the evolutionary trajectory that led to them," said University of Chicago neurobiology graduate student Yan Wang, another of the researchers.