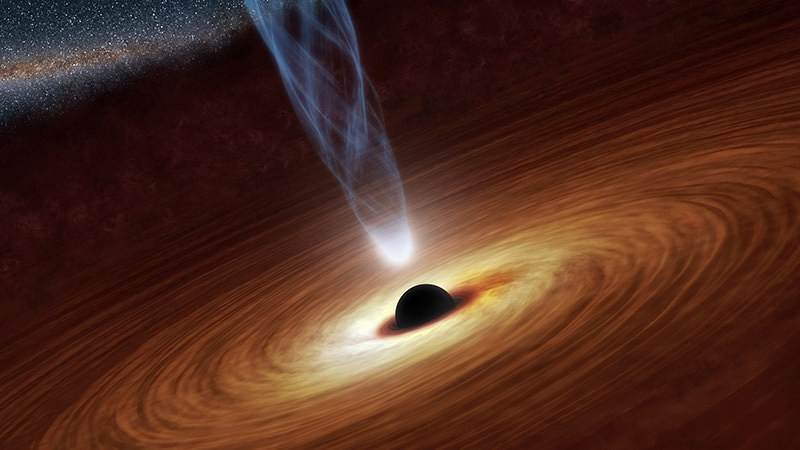 A supermassive black hole with millions to billions times the mass of our sun is seen in an undated NASA artist's concept illustration (Reuters photo)
by Daily Sabah Aug 26, 2015 12:00 am
Famed astrophysicist Stephen Hawking may have just solved one of the most perplexing mysteries in physics, the "information paradox", which continues to puzzle scientists who study black holes.

According to a news article published on the Sydney Morning Herald on Aug. 26, in a nutshell, the paradox involves the fact that information about the star that formed a black hole seems to be lost inside it, presumably disappearing when the black hole inevitably disappears.

"These things cannot be lost, according to the way we think the universe works, and physicists generally believe that they aren't really lost. But where does the information go when the black hole that's absorbed it goes kaput?", the article says.

Einstein's theory of general relativity predicts that the physical information about material gobbled up by a black hole is destroyed, but the laws of quantum mechanics stipulate that information is eternal. Therein lies the paradox, the article further states.

"I propose that the information is stored not in the interior of the black hole, as one might expect, but on its boundary, the event horizon," Stephen Hawking said during a talk on Aug. 25 at the Hawking Radiation conference, which is being held at the KTH Royal Institute of Technology in Stockholm, Sweden, according to the article.

The information is stored at the boundary as two-dimensional holograms known as "super translations," he explained. But you wouldn't want super translations, which were first introduced as a concept in 1962, to back up your hard drive.

"The information about ingoing particles is returned, but in a chaotic and useless form," Hawking said. "For all practical purposes, the information is lost."

Hawking also discussed black holes — whose gravitational pull is so intense that nothing, not even light, can escape once it passes the event horizon — during a lecture last night (Aug. 24) in Stockholm.

"The hole would need to be large, and if it was rotating, it might have a passage to another universe. But you couldn't come back to our universe," Hawking said at the lecture, according to a KTH Royal Institute of Technology statement. "So, although I'm keen on spaceflight, I'm not going to try that."