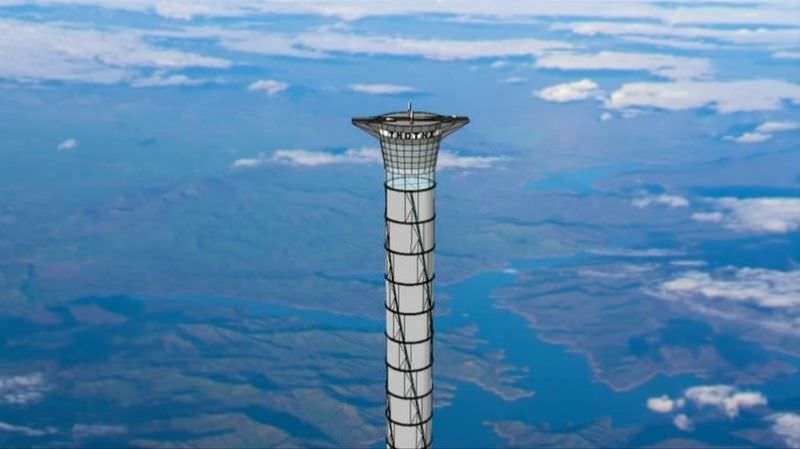 by Sep 04, 2015 12:00 am
Ambitious plans to build a twenty kilometer (12.4 miles) tall space elevator tower have been announced by a Canadian space technology firm.

Although this distance is a mere fraction of that reached in space missions, Thoth Technology says its ThothX Tower will make a major cost reduction in space flights by helping navigate the difficult first 50 kilometers (31 miles) of travel that traditionally requires rockets. The latter are inefficient, particularly regarding fuel consumption. In addition to needing to carry sufficient fuel to get a payload into orbit, they need extra fuel in order to carry the required fuel to reach that point in the first place.

Despite first being proposed more than a century ago, the idea of a space elevator has always appeared fanciful.

Thoth Technology has been granted a United States (US) patent for the elevator, which is pneumatically pressurized and actively-guided over its base. It would stand more than 20 times higher than the world's largest man-made structure - the 829.8 meter (2,722 foot) tall Burj Khalifa in Dubai.

According to Thoth space systems specialist Ian Tomaszewski, "if you have a 20 kilometer tall tower and you launch from the tower then you can get to Space in a single stage to orbit. Normally on a rocket launcher you would launch vertically for a while and then you expel those stages of the propellant and those will fall back down to the ocean, and then you continue on. By this you will eliminate that part of the journey and you will be able to get to Space in a single stage."

Flywheels would provide dynamic stability and act as compressors to pressurize the tower. The flywheels would compensate for any bending of the tower by adjusting pressure and spin.

A rocket's energy intensive vertical flight and drop-off stages would therefore be unnecessary.

In rocket launches mass is expelled at a high velocity to achieve thrust in the opposite direction. Thoth says its space elevator would take 30 percent less energy, because no expulsion mass is required against gravity. Thoth says their technology could make it cheaper and easier for privately funded companies to conduct space travel.

"We think it's realistic," said Tomaszewski. "We're looking to license the patent to Google or Alphabet, SpaceX, Elon Musk, maybe the European Space Agency, and we think that in three to five years a 1.5 kilometer prototype model - full-scale model - could be accomplished."

It could also be used for communications, tourism, and to generate wind energy.

"There's a lot of opportunities for the structure," said Tomaszewski. "Tourism is one. You'd have a great sight of the earth at 20 kilometers up, you'd see about 1,000 kilometers in any direction. Communications. So right now geostationary satellites, once they're up there you can't really service them. If we had facilities on the tower it would have that same 1,000 kilometer range and you'd be able to service them."

Thoth is also working on its major contribution to NASA's Osiris Rex mission, in which the space agency plans to land on an asteroid called Bennu which passes close to the earth every six years.

The company is providing LiDAR remote sensing technology that uses light in the form of a pulsed laser to measure distances to the Earth.

Head of research and development Catherine Tsouvaltsidis is testing the LiDAR equipment at Thoth's thermal vacuum chamber on the York University campus in downtown Toronto.

She added: "We're really interested in looking to see what was life like at the beginning of our time frame. We're also very interested in looking at asteroids which follow a very earth-like orbit, which means they travel around the sun at almost the same time frame as we do on the planet but also travel very close to earth. Bennu, for example, every six years comes within oh, such a terribly close distance, that we're very interested in finding out more about its composition, its size, and everything else to know about it because it will have a direct link to us as humans."

The Bennu mission is scheduled for launch in September 2016.