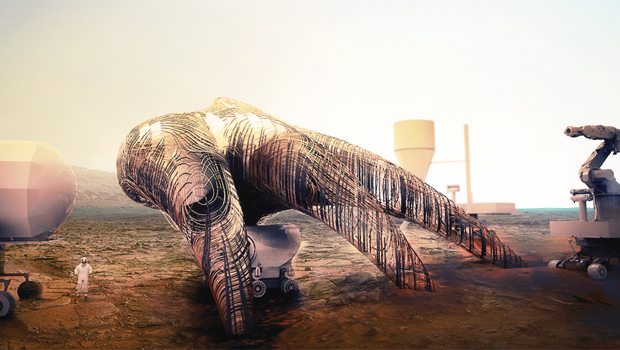 Photo from Twitter account @NasaPrize
by daily sabah
Oct 06, 2015 12:00 am
After the groundbreaking announcement that liquid water was found on Mars, NASA (National Aeronautics and Space Administration) and America Makes (National Additive Manufacturing Innovation Institute) held a $2.25 million Mars Habitat competition in which teams competed to design and build a 3-D printed habitat suitable for living on the Red Planet itself. Among 168 innovative projects, Turkish architect Güvenç Özel and his team 'Hybrid Composites' came in 4th place in the 3D-Printed Mars Habitat Challenge.Design Competition.

Özel, who lives in the United States, has brought forward with his team a project which has taken modern day concrete 3D printing to a new level with a 'Hybrid composites' design. The 'reactive' structure they created uses local basalt as its primary material along 'with fast-curing polymers and high-performance composite fibers' which would react to heat and UV light.

Born in Turkey's İzmir province, Özel is an architect, faculty member and researcher at UCLA's Architecture department and has been conducting research on aerospace engineering, material sciences, robotics and many more.

As part of NASA's Centennial Challenges program, the competition focused on additive manufacturing technology for sustainable housing in an off-Earth habitat.

The competitors were asked to design a base for four astronauts by using 3-D printing techniques. Judged on architectural concept, design, habitability, functionality, 3-D print constructability, Mars site selection and innovation, the teams were only allowed to use indigenous materials as their primary sources.

Among all submissions received, the 30 highest-scoring entries were judged and displayed at the New York Maker Faire event within the scope of the first stage of the 3-D Printed Habitat Challenge Design Competition.

NASA revealed that the winning designs will be funded to create a habitat for the first visitors to the red planet.

Third place was awarded to Team LavaHive, who received $10,000 for their inflatable space habitat made out of recycled spacecraft materials.

Scientists previously reported on September 28, 2015 that Mars appeared to have not only frozen water but flowing streams of salty water, at least in the warmer months. They had said that dark, narrow streaks grew during the Martian summer, and faded the rest of the year. Salt lowers the freezing point of water, and scientists say that would explain these seasonal briny flows.