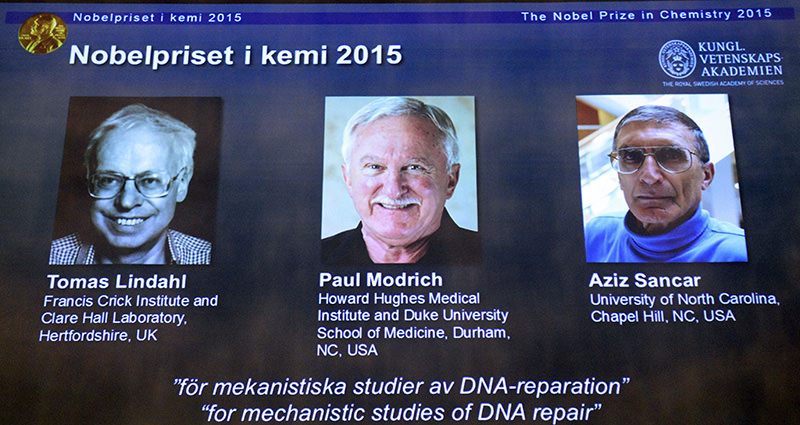 Aziz Sancar, a Turkish professor at the University of North Carolina, wins Nobel Chemistry Prize along with Tomas Lindahl and Paul Modrich, with their work on how cells repair damaged DNA

Aziz Sancar, a Turkish biochemist and molecular biologist specializing in DNA repair, cell cycle checkpoints, and the circadian clock won the 2015 Nobel Chemistry Prize along with Sweden's Tomas Lindahl, Paul Modrich of the U.S. on Wednesday for work on how cells repair damaged DNA. Aziz Sancar became the second Turkish person to win a Nobel Prize after novelist Orhan Pamuk, who won the 2006 Nobel Prize for Literature.

Sancar, 69, is a professor at the University of North Carolina School of Medicine in Chapel Hill, North Carolina. "I'm sure there will be (celebrations in Turkey)," Sancar said in an interview published on the Nobel Foundation's website. "Yes, they've been asking over the years and I was tired of hearing 'when are you going to get the Nobel Prize?' so I'm glad for my country as well."

President Recep Tayyip Erdoğan has reportedly called Sancar to congratulate him and wished him more success in his future scientific endeavors. In response, Sancar expressed his gratitude for sharing his joy with the President of Turkey and thanked Erdoğan.

The winners opened a dazzling frontier in medicine by unveiling how the body repairs DNA mutations that can cause sickness and contribute to ageing, the Nobel jury said.

"Their systematic work has made a decisive contribution to the understanding of how the living cell functions, as well as providing knowledge about the molecular causes of several hereditary diseases and about mechanisms behind both cancer development and ageing," the panel said.

DNA - deoxyribonucleic acid - is the chemical code for making and sustaining life.

Cells divide, or replicate, billions of times throughout our lifetime.

Molecular machines seek to copy the code perfectly, but random slipups in their work can cause the daughter cells to die or malfunction. DNA can also be damaged by strong sunlight and other environmental factors.

But there is a swarm of proteins - a molecular repair kit - designed to monitor the process. It proof-reads the code and repairs damage.

The three were lauded for mapping these processes, starting with Lindahl, who identified so-called repair enzymes - the basics in the toolbox.
Sancar discovered the mechanisms used by cells to fix damage by ultraviolet radiation. Modrich laid bare a complex DNA-mending process called mismatch repair.

"The basic research carried out by the 2015 Nobel laureates in chemistry has not only deepened our knowledge of how we function, but could also lead to the development of lifesaving treatments," the Nobel committee said.

With cells able to repair themselves, one could ponder the dizzying possibility that humans could go on living forever.

"No, I don't believe in eternal life," Lindahl, who is based in Britain, told reporters at the prize announcement, saying winning the prestigious honor was "a surprise."

Other scientists heaped praise on Lindahl for his pioneering work.

They included Britain's prestigious Royal Society, of which he is a fellow, and British biochemist Sir Tim Hunt, who co-won the 2001 Nobel for cell duplication.

"This is wonderful news!" Hunt told the Science Media Centre (SMC) in London. "Tomas was my boss for almost 20 years, a real scientists' scientist... (a) richly-deserved prize."

It is the seventh time DNA research has been honored with a Nobel prize. The first was in 1962, for the discovery of the structure of DNA.
Lindahl, Modrich and Sancar share the prize sum of 8 million Swedish kronor ($950,000).

Lindahl, 77, is the emeritus director of Cancer Research UK at Clare Hall Laboratory in Britain.

Modrich, born in 1946, is also a professor of biochemistry, at Duke University in the U.S.

Sancar, 69, was one of the family's eight children in the small Turkish town of Savur. He could have become a professional football player - Turkey's national junior team courted him to become their goalkeeper - but he chose to focus on his academic studies instead.

After working as a doctor in the countryside, he resumed his biochemistry studies at the age of 27, and then went to the University of Texas in Dallas.

He told the Nobel Foundation he was stunned by his win.

"I have just gotten a call half an hour ago. My wife took it and woke me up. I wasn't expecting it at all. I was very surprised," he said, adding: "I tried my best to be coherent."

The Nobel awards week continues with the announcements for the two most closely-watched prizes: on Thursday the winner of the literature prize will be announced, followed by the peace prize on Friday.

The economics prize will wrap up this year's Nobel season on Monday, Oct. 12.

The laureates will receive their prizes at formal ceremonies in Stockholm and Oslo on Dec. 10, the anniversary of the 1896 death of prize creator Alfred Nobel, a Swedish philanthropist and scientist.

Sancar was born in 1946 in Turkey's southeastern province of Mardin . After he completed his M.D. at Istanbul University and completed his Ph.D. on the photoreactivating enzyme of E. coli in 1977 at the University of Texas.

Currently a professor at the University of North Carolina, Sancar is an honorary member of the Turkish Academy of Sciences and the American Academy of Arts and Sciences.