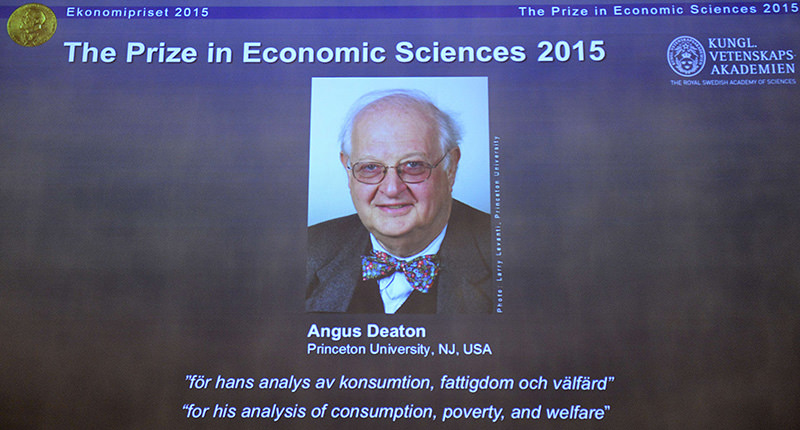 A portrait of US-British winner of the 2015 Nobel Economics Prize Angus Deaton is displayed on a giant screen during a press conference on October 12, 2015 in Stockholm. (AFP photo)
by reuters
Oct 12, 2015 12:00 am
British-born economist Angus Deaton won the 2015 economics Nobel Prize for "his analysis of consumption, poverty and welfare", the Royal Swedish Academy of Sciences said on Monday.

The academy said that Deaton's work had been a major influence on policy making, helping for example to determine which social groups are affected by an increase of value-added tax on food.

"More than anyone else, Angus Deaton has enhanced this understanding," it said.

Deaton also spearheaded the use of household survey data in developing countries, especially data on consumption, to measure living standards and poverty, the academy said.

The economics prize, officially called the Sveriges Riksbank Prize in Economic Sciences in Memory of Alfred Nobel, was established in 1968. It was not part of the original group of awards set out in dynamite tycoon Nobel's 1895 will.

Deaton, who was born in Edinburgh and holds both British and U.S. citizenship, is professor of Economics and International Affairs at Princeton University in the United States.
Last Update: Oct 12, 2015 2:40 pm