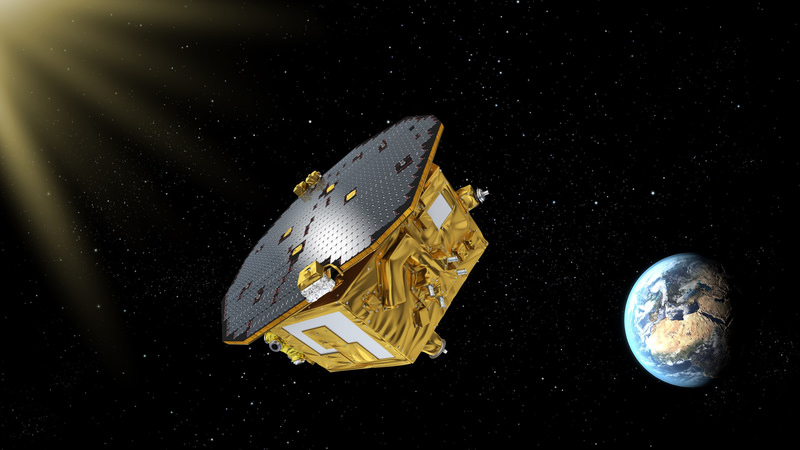 This handout image obtained from the European Space Agency on November 29, 2015 shows an artistu2019s impression of the LISA Pathfinder. (AFP Photo)
by Associated Press Dec 03, 2015 12:00 am
The European Space Agency launched a rocket Thursday to carry two cubes of gold and platinum almost a million miles from Earth so scientists can see how they'll behave in a freefall at a cost of more than $450 million.

What may sound like a frivolous enterprise is actually the prelude to a far more ambitious mission that hopes to measure ripples in space time caused by black holes and other massive objects lurking unseen in dark corners of the galaxy.

Also known as gravitational waves, these ripples were predicted by Albert Einstein a century ago but have never been directly detected.

In order for that mission tentatively scheduled for launch in 2034 to succeed, the European Space Agency first has to test whether it can shield objects from external influences well enough to measure the minute effects of gravitational waves.

"We want to see whether we can create an environment in orbit that's free of interference, and where we can conduct these high-precision measurements," said Michael Menking, senior vice president for Earth observation, navigation and science at Airbus Defense and Space. The company is the main technology contractor on the LISA Pathfinder mission.

The probe separated from the Vega rocket two hours after its launch from ESA's space port in French Guiana at 1:04 a.m. local time (0404 GMT) Thursday.

"We have a mission," project scientist Paul McNamara said to cheers and hugs at the control rooms in Kourou and Darmstadt, Germany, after receiving the first signal from the spacecraft.

By mid-January, the probe will have reached an orbit about 1.5 million kilometers (930,000 miles) from Earth, where the pull from the planet's gravity is balanced by that of the sun. The cubes made from gold and platinum to reduce their susceptibility to magnetic fields are then carefully released inside a box that shields them from cosmic particles and other interference that might affect the measurements performed by a sensitive laser. The laser is capable of detecting movements of less than 10 millionths of a millionth of a meter.

"Our biggest enemy is the light from the sun that hits the satellite and pushes it around," said Oliver Jennrich, a scientist working on the LISA Pathfinder mission.

To counter this, the satellite uses NASA-supplied thrusters capable of making tiny corrections to the probe's position to keep it in the right orbit and prevent the free-falling cubes from crashing into the inside of the box.

This should provide a near-perfect cosmic isolation chamber to measure the effect of gravitational waves, said Jennrich.

The LISA Pathfinder mission itself won't detect any gravitational waves, though. Because the two 2-kilogram (4.4-pound) cubes are only 38 centimeters apart, any object big enough to affect their relative position would have to be so huge it would be visible with the naked eye, said Jennrich.

Instead, the real measurements will likely have to wait almost two decades for the follow-up mission, provisionally called LISA. It will involve three satellites positioned in a triangle 5 million kilometers apart from each other. Together they should be able to detect gravitational waves caused by enormous objects such as supermassive black holes, like the one that's thought to sit at the center of the Milky Way.

Jennrich said measuring gravitational waves would also allow scientists to peer through the dust and debris that obscures much of what's going on at the center of the galaxy.

By the time LISA is launched, ground-based experiments may have already succeeded in detecting gravitational waves for the first time, said Toby Wiseman, a physicist at Imperial College, London, who isn't involved with the space project.

But because of the interference they suffer on Earth, ground-based experiments will likely be limited to measuring the extreme bursts of gravitational waves that occur during rare, dramatic events.

"It's probably the most challenging mission we're doing in the science program, because the precision by which you need to measure the test mass position is very, very high," said Arvind Parmar, head of the European Space Agency's scientific support office.

Further scientific advances need to be made over the next decade before a decision is made in 2024 whether to go ahead with the LISA mission, said Parmar.

Still, scientists have great hopes for what that probe might eventually reveal.

"Actually, what will be really exciting is finding the things we don't know about yet," said Parmar.
Last Update: Dec 03, 2015 8:19 pm
RELATED TOPICS