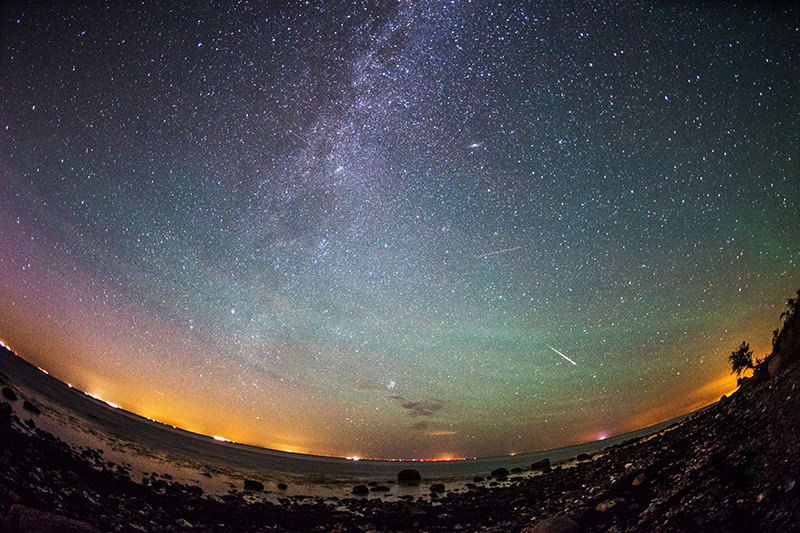 The Perseid meteor shower occurs every year in summer when the Earth passes through debris and dust of the 109P/Swift-Tuttle comet. (EPA Photo)
by Dec 22, 2015 12:00 am
Planet Earth could be at higher risk of a space rock impact than widely thought, according to astronomers who suggested Tuesday keeping a closer eye on distant giant comets.

Most studies of potential Earth-smashers focus on objects in the asteroid belt roughly between Mars, Earth's outside neighbour, and Jupiter on its other flank, said the researchers.

But they noted that the discovery in the last two decades of hundreds of giant comets dubbed centaurs, albeit with much larger orbits, requires expanding the list of potential hazards.

These balls of ice and dust, typically 50-100 kilometres (31-62 miles) wide, have unstable, elliptical orbits that start way beyond Neptune, the most distant planet from the Sun.

Their orbits cross those of the giant planets Jupiter, Saturn, Uranus and Neptune, whose gravity fields occasionally deflect a comet towards Earth -- once about every 40,000-100,000 years.

As they draw closer to the Sun, the comets would gradually break up, which is what causes the trademark cometary debris tail -- "making impacts on our planet inevitable".

"The disintegration of such giant comets would produce intermittent but prolonged periods of bombardment lasting up to 100,000 years," the research team wrote in the Royal Astronomical Society journal, Astronomy and Geophysics.

And they argued that "assessment of the extraterrestrial impact risk based solely on near-Earth asteroid counts, underestimates its nature and magnitude."

They added that a single centaur contains more mass than the entire population of Earth-crossing asteroids discovered to date.

"In the last three decades, we have invested a lot of effort in tracking and analysing the risk of a collision between the Earth and an asteroid," said co-author Bill Napier of the University of Buckingham.

"Our work suggests we need to look beyond our immediate neighbourhood too, and look out beyond the orbit of Jupiter to find centaurs.

"If we are right, then these distant comets could be a serious hazard, and it's time to understand them better."

Scientists believe a comet bombardment may have kickstarted life on Earth by bringing water and organic molecules.

A comet strike is also a leading contender for having ended the reign of the dinosaurs 65 million years ago.
Last Update: Dec 22, 2015 5:29 pm
RELATED TOPICS