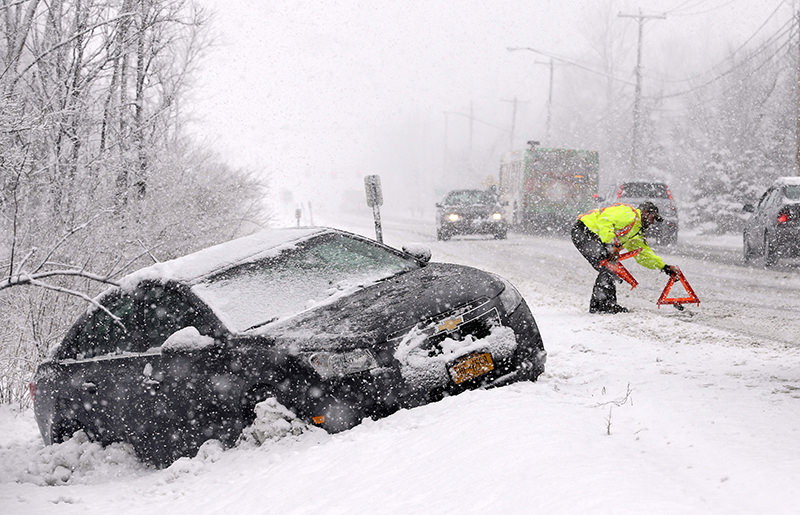 A car navigates the snow covered road in City Creek Canyon as a major storm dumped snow through out the state in Salt Lake City, Monday, Dec. 14, 2015. (AP Photo)
by Daily Sabah Dec 22, 2015 12:00 am
Turkish engineers and academics are blazing a trail in the world of energy with their new finding. A group of academics from Turkey's Koç University Tüpraş Energy Center (KUTEM) developed an anti-icing substance to be used in asphalt that will prevent roads from becoming icy and in return avert many dangerous traffic accidents.

This new substance, which is a polymer composite, will be mixed into the tar in the asphalt and -similar to road salting- will prevent ice from forming on the road surface.

Thanks to its freezing delay properties, this substance will be a life-saver for bridges and viaducts as these two tend to freeze the first in cold as they lose heat from all sides and cannot trap heat.

Although it is not yet decided when the mass production of the substance will be commenced, many concur that it will indeed be a life-saver as it will prevent traffic accidents caused by icing.

Established in 2012 via funds from the Turkish Petroleum Refineries Co.(Tüpraş), KUTEM is an energy research center at Koç University which is a non-profit private university in Istanbul. KUTEM center constitutes of about 30 faculty members from the university's Engineering, Sciences and Administrative Science & Economics departments. The center is focused on developing new energy technologies in areas such as fossil fuel, biofuel and solar fuel.

Tüpraş is Turkey's largest industrial enterprise and petroleum giant that aims to be known for its respect for the environment and life values. Operating four oil refineries, the company has an annual processing capacity a total of 28.1 million tons of crude oil. It envisions to improve the efficiency of fuel production technologies in Turkey while reducing green house emissions.