US scientists say a Neptune-sized 'ninth planet' lurks beyond Pluto 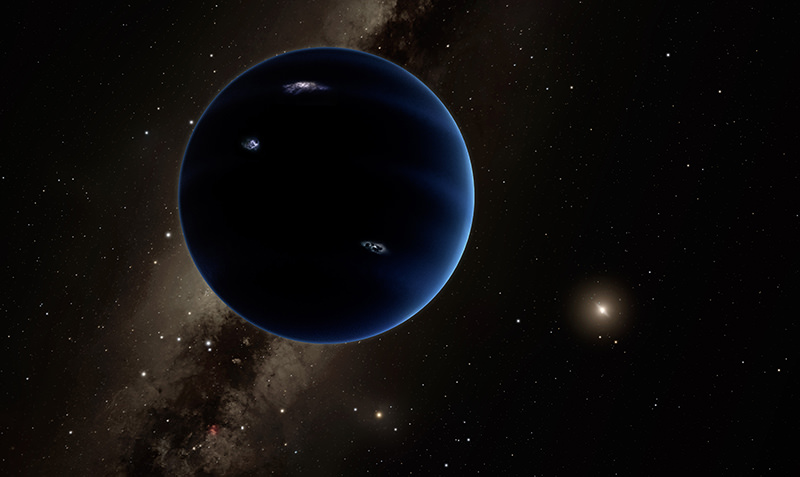 This artistic rendering provided by California Institute of Technology shows the distant view from Planet Nine back towards the sun. (AP Photo)
by French Press Agency - AFP
Jan 20, 2016 12:00 am
A previously unknown giant planet may have been discovered lurking in the outer reaches of our solar system, US scientists announced on Wednesday.

Nicknamed Planet Nine, the object "has a mass about 10 times that of Earth" and follows a "bizarre, highly elongated orbit in the distant solar system," said a statement by researchers at the California Institute of Technology (Caltech).

The report was published in the Astronomical Journal.

Researchers Konstantin Batygin and Mike Brown say have not yet observed the object directly.

Rather, they found it through mathematical modeling and computer simulations.

The presumed planet has about 5,000 times the mass of Pluto, and scientists believe its gravity has affected the motion of dwarf planets in the outer solar system, essentially perturbing celestial bodies in the field of icy objects and debris beyond Neptune known as the Kuiper Belt.

"Like a parent maintaining the arc of a child on a swing with periodic pushes, Planet Nine nudges the orbits of distant Kuiper Belt objects such that their configuration with relation to the planet is preserved," explained CalTech in a statement.

The planet could have been cast off during the early formation of the solar system, when four major cores grabbed up the gas around them and formed Jupiter, Saturn, Uranus and Neptune.

Perhaps Planet Nine represented a fifth core, that may have gotten too close to Jupiter or Saturn and been ejected into its current, distant orbit, said Brown.

A host of powerful telescopes are currently hunting for Planet Nine, including the twin 10-meter telescopes at the W. M. Keck Observatory and the Subaru Telescope on Maunakea in Hawaii.

"Although we were initially quite skeptical that this planet could exist, as we continued to investigate its orbit and what it would mean for the outer solar system, we've become increasingly convinced that it is out there," said Batygin, an assistant professor of planetary science.