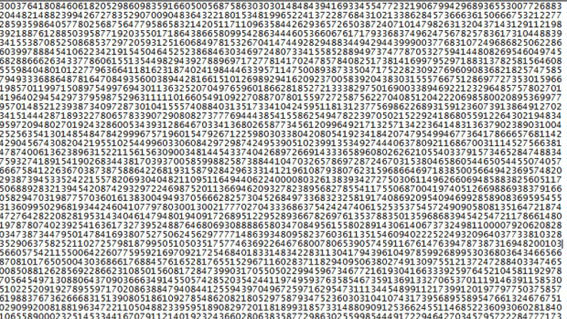 by Anadolu Agency
Jan 22, 2016 12:00 am
Mathematicians announced Wednesday that they have discovered the largest prime number - 22 million digits long. The number is nearly 5 million digits longer than the former record holder discovered in 2013. Both were discovered by the Great Internet Mersenne Prime Search project (GIMPS), a system of software used by volunteers to discover the staggeringly huge numbers. The discovery took a month of non-stop computing by a system at the University of Central Missouri (UCM) and was led by UCM's Dr. Curtis Cooper. Cooper made the discovery by multiplying the numeral 2 by itself 74,207,281 times and then subtracting 1. After the discovery was initially made, it was verified by a supercomputer at the Squirrels software company.

The number is known as a Mersenne prime, named after a Renaissance-era French monk who discovered that huge prime numbers - a number that can be divided by only itself and 1 - could be found by multiplying 2 by itself and then subtracting 1. This relatively simple equation holds up even when the numbers are nearly incomprehensible. The 10 largest prime numbers are all Mersenne primes and have all been discovered by GIMPS. "This is the first Mersenne prime number found since 2013, and it's one of only 49 found in more than 550 years," said Squirrels President David Stanfill.

If written down, Cooper's discovery would contain more than 7 million commas and stretch out roughly 109 kilometers. While the work may seem chiefly academic, discovering these large numbers can help in fields such cybersecurity. "The technological improvements and software optimizations made in the search for this number will have benefits in many areas of life," Stanfill added. "We'll see reverberations from this discovery in technology, health sciences, education and more." GIMPS is now searching for a prime number with 100 million digits.