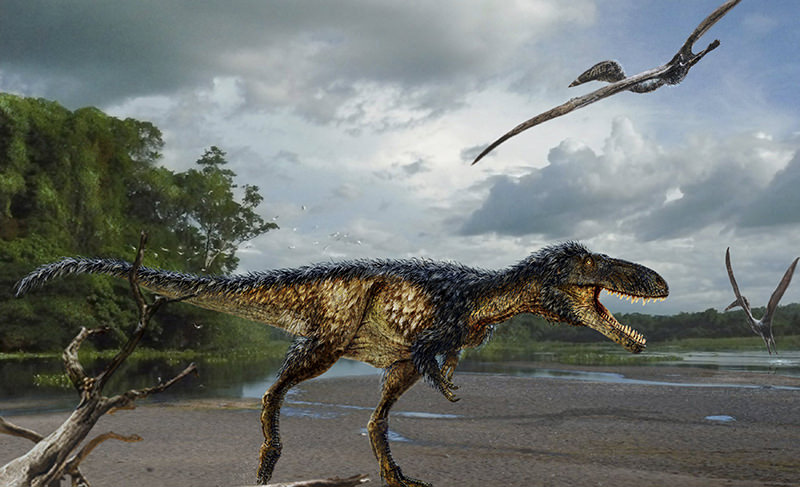 A life reconstruction of the new tyrannosaur Timurlengia euotica, accompanied by two flying reptiles (Azhdarcho longicollis) in their environment 90 million years ago, is pictured in this undated illustration released on March 14 (Reuters Photo)
by Compiled from Wire Services Mar 16, 2016 12:00 am

Scientists with the US National Museum of Natural History in Washington announced Monday that the fossilized remains of a new type of dinosaur found in Uzbekistan reveal a link between the Tyrannosaurus rex and its ancestors.

Until now, researchers have had little evidence of how the iconic predator became one of the largest carnivores to ever roam the Earth before the dinosaurs went extinct 65 million years ago.

The answers could lie in the brain of Timurlengia euotica, a previously unknown relative of the T. rex.

Timurlengia euotica was far smaller than the elephant-sized T. rex, but had already developed the large brain it needed to track and devour prey. 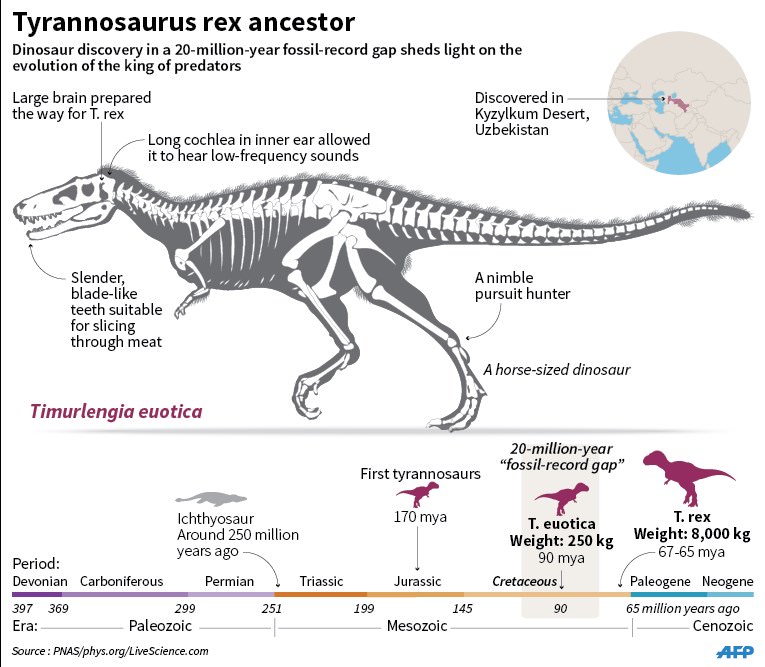 While researchers cautioned that the discovery represents just one animal in a long lineage, its features help illustrate how small tyrannosaurids evolved to grow smarter and larger over time, thanks to keen senses that could help keep their bellies filled.

"The ancestors of T. rex would have looked a whole lot like Timurlengia, a horse-sized hunter with a big brain and keen hearing that would put us to shame," said Steve Brusatte of the University of Edinburgh's School of GeoSciences.

"Only after these ancestral tyrannosaurs evolved their clever brains and sharp senses did they grow into the colossal sizes of T. rex.

"Tyrannosaurs had to get smart before they got big."

The first tyrannosaurs appeared about 170 million years ago and were about the size of a human.

The bones of Timurlengia euotica were uncovered in Uzbekistan, where it lived about 90 million years ago.

By the Late Cretaceous Period, between 66 and 80 million years ago, the T. rex was the don of the big lizards, often weighing more than seven tons.

Not much is known about how the T. rex got so big, "largely because of a frustrating 20-plus-million-year gap in the mid-Cretaceous fossil record, when tyrannosauruses transitioned from small-bodied hunters to gigantic apex predators but from which no diagnostic specimens are known," said the study published in the Proceedings of the National Academy of Sciences.

The new discovery is "the first distinct tyrannosauroid species from this gap."

The specimen was discovered between 1997 and 2006 by a team of palaeontologists, led by researchers at the University of Edinburgh, working in the Kyzylkum Desert in northern Uzbekistan.

"The early evolution of many groups like tyrannosaurs took place in the coastal plains of central Asia in the mid-Cretaceous," said professor Alexander Averianov of Saint Petersburg State University.

Timurlengia's skull was much smaller than that of the T. rex, suggesting it did not grow as big, but its skull shape reveals "that its brain and senses were already highly developed," the report said.

"Timurlengia was a nimble pursuit hunter with slender, blade-like teeth suitable for slicing through meat," said professor Hans Sues, of the National Museum of Natural History in Washington.

"It probably preyed on the various large plant-eaters, especially early duck-billed dinosaurs, which shared its world."