Pluto likely harbors an ocean under its surface: NASA 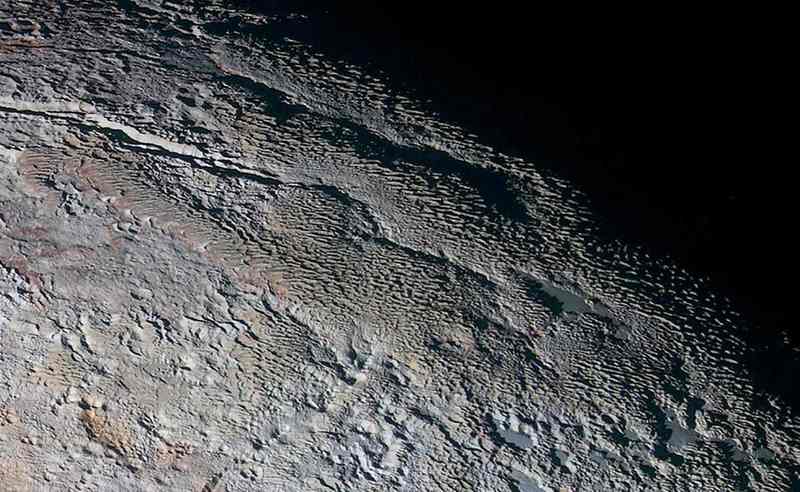 Pluto likely harbors an ocean beneath its frozen surface, according to new reports released Thursday by NASA, which also highlighted that the dwarf planet is surprisingly complex.

Five studies are based on data provided by NASA's New Horizons spacecraft that flew past Pluto last July after a nine-year, 4.8 billion kilometer (3 billion mile) journey.

The new information suggests Pluto and its moon, Charon, have been very geologically active throughout their existence.

Since Pluto was first discovered at the edge of the solar system in 1930, astronomers believed the icy world was rocky, frozen and inert.

It occupies the Kuiper Belt, an ancient region filled with trillions of comets and asteroids beyond Neptune, the farthest flung official planet.

But it appears that Pluto's surface is relatively young and probably conceals a large body of water. Some areas of the dwarf planet are likely heated by radioactive substances in rocks.

Vast regions of the frozen realm's surface are built of intriguingly different substances, including nitrogen, methane and water. In fact, NASA claims that the diverse variations of Pluto's surface composition are unprecedented in the solar system.

"Observing Pluto and Charon up close has caused us to completely reassess thinking on what sort of geological activity can be sustained on isolated planetary bodies in this distant region of the solar system, worlds that formerly had been thought to be relics little changed since the Kuiper Belt's formation," said NASA's Jeff Moore, lead author of one report.

If liquid water is located inside Pluto, it is likely extremely loaded with ammonia, a chemical that kills most life on Earth.

Any time water is found elsewhere in the universe it causes excitement for astronomers looking for extraterrestrial life.

The studies were published in the journal Science.