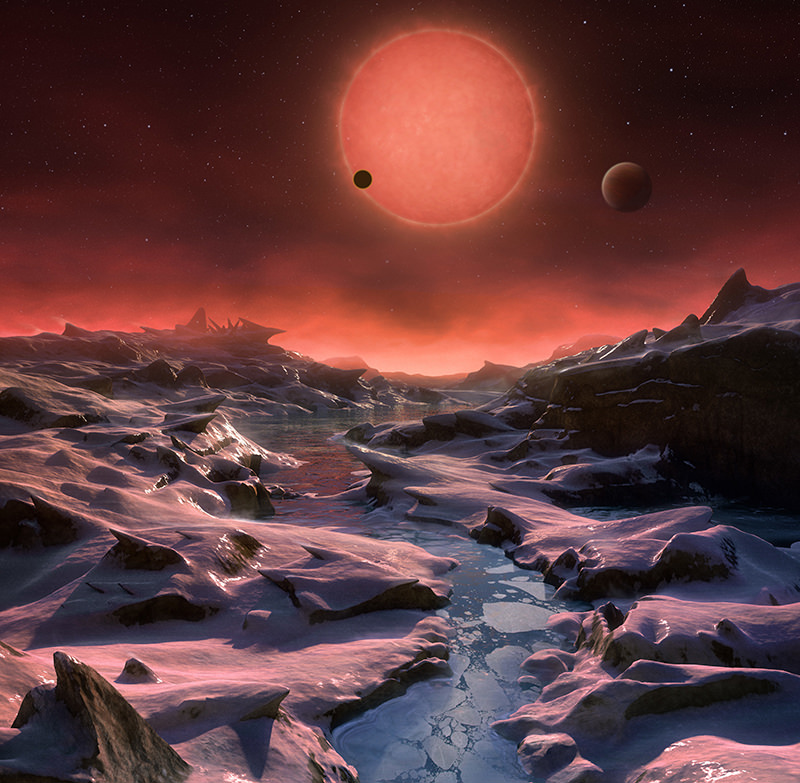 The artist's impression provided by European Southern Observatory on May 2, 2016 shows an imagined view from the surface one of the three planets. (AP Photo)
by May 02, 2016 12:00 am

An international team of scientists said Monday they had discovered a trio of Earth-like planets that are the best bet so far for finding life outside our solar system.

The three orbit an ultracool dwarf star a mere 39 light years away, and are likely comparable in size and temperature to Earth and Venus, they reported in a study, published in Nature.

"This is the first opportunity to find chemical traces of life outside our solar system," said lead author Michael Gillon, an astrophysicist at the University of Liege in Belgium.

All three planets had the "winning combination" of being similar in size to Earth, "potentially habitable" and close enough so their atmospheres can be analysed with current technology, he told AFP.

The find opens up a whole new "hunting ground" for habitable planets, he added.

Gillon and colleagues calibrated a 60-centimetre (23.5-inch) telescope in Chile, known as TRAPPIST, to track several dozen dwarf stars neither big nor hot enough to be visible with optical telescopes.

They zeroed in on a particularly promising one -- now known as TRAPPIST-1 -- about one eighth the size of the Sun, and significantly cooler.

Observing it for months, the astronomers noticed that its infrared signal faded slightly at regular intervals, evidence of objects in orbit.

Further analysis confirmed they were exoplanets -- planets revolving around stars outside our solar system.

The innermost two circle their dwarf star every 1.5 and 2.4 days, though they are hit with only four and two times the amount of heat-generating radiation that Earth receives from the Sun.

The more distant orbit of the third planet takes between four and 73 days, according to the study.

"So far, the existence of such 'red worlds' orbiting ultra-cool dwarf stars was purely theoretical, but now we have not just one lonely planet but three," said co-author Emmanuel Jehin, also from the University of Liege.

He called the discovery a "paradigm shift" in the search for life elsewhere in the universe.

Given their size and proximity to their low-intensity star, all three planets may have regions at temperatures within a range suitable for sustaining liquid water and life, the study concluded.

Their proximity to Earth means scientists will be able to find out a lot more.

"These planets are so close, and their star so small, we can study their atmosphere and composition," said co-author Julien de Wit, a postdoc at the Massachusetts Institute of Technology (MIT.)

"This is a jackpot for the field," he said in a statement, adding that it should be possible to determine if they harbour life "within our generation."

Up to now, the search for Earth-like orbs in our Galaxy and beyond centred on stars like our Sun, more massive and hotter than the dwarf around which the newly-discovered worlds orbit.

But the discovery suggests that a significant fraction of ultracool dwarfs hold potentially habitable planets in their gravitational sway.

"At the scale of the Galaxy, this means billions of additional places where life might have developed," Gillon said.

The mass of the three planets circling TRAPPIST-1 cannot be less than 50 percent of that of Earth, and are probably not more than double, he added.

"They could be richer or poorer in water and rocks than our planet, and if they have an atmosphere, it is probably very different that ours."

To give rise to life as we know it, planets have to be in a "Goldilocks zone" in relation to their star, far enough away so that its heat doesn't evaporate all the water, but close enough so that it can exist in liquid form.

Building and using the TRAPPIST infrared telescope to hunt for planets was a risky strategy.