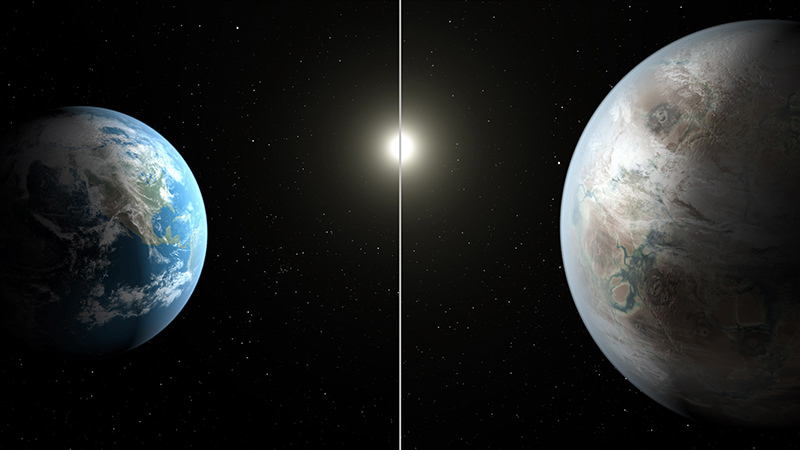 Astronomers hunting for another Earth have found what may be the closest match yet, a potentially rocky planet circling its star at the same distance as the Earth orbits the Sun, NASA said July 23, 2015. (AFP Photo)
by May 10, 2016 12:00 am

NASA announced Tuesday the discovery of 1,284 new planets outside our solar system, more than doubling the number of exoplanets found with the Kepler space telescope.

"This gives us hope that somewhere out there, around a star much like ours, we can eventually discover another Earth," said Ellen Stofan, chief scientist at NASA headquarters in Washington.

The unmanned Kepler space observatory, which launched in 2009, has been scanning 150,000 stars for signs of orbiting bodies, particularly those that might be able to support life.

It works by observing a dimming in the light of a star, known as a transit, each time an orbiting planet passes in front of it.

"Of the nearly 5,000 total planet candidates found to date, more than 3,200 now have been verified, and 2,325 of these were discovered by Kepler," NASA said in a statement.

Of the new trove of 1,284, nearly 550 could be rocky planets like Earth, based on their size, the U.S. space agency said.

"Nine of these orbit in their sun's habitable zone, which is the distance from a star where orbiting planets can have surface temperatures that allow liquid water to pool."

The addition of these nine means that 21 exoplanets now are known to be circling their stars in the so-called "habitable zone," and may harbor life.

However, Kepler is a "statistical mission," NASA scientists said, and is not designed to probe further into the environmental conditions of planets that exist in the so-called "Goldilocks zone" of their stars -- neither too hot nor too cold to sustain life.

That means even the most advanced space telescopes now being built, including the James Webb Space Telescope, may not be able to shed much more light on the nature of life -- if it exists -- on another of these distant exoplanets.

"If you ask yourself the question, where is the nearest potentially habitable planet likely to be, you find that it is going to be within about 11 light-years," said Natalie Batalha, Kepler mission scientist at NASA's Ames Research Center.

Although she described that distance as "astronomically speaking... very close," one light-year equals about six trillion miles (9.5 trillion kilometers), and no spacecraft or technology exists to travel that far.

However, Kepler has already opened up a great deal about the galaxy that surrounds us.

"Before the Kepler space telescope launched, we did not know whether exoplanets were rare or common in the galaxy. Thanks to Kepler and the research community, we now know there could be more planets than stars," said Paul Hertz, astrophysics division director at NASA headquarters.

"This knowledge informs the future missions that are needed to take us ever closer to finding out whether we are alone in the universe."

The latest trove of planets was confirmed by a new statistical method, instead of the time-consuming, one-by-one process previously used.

This statistical analysis method can be applied to many planet candidates simultaneously, according to Timothy Morton, associate research scholar at Princeton University and lead author of a paper describing the findings in The Astrophysical Journal.

Kepler survived an emergency last month, when some kind of "transient event... triggered a barrage of false alarms that eventually overwhelmed the system," NASA said.

The space telescope suffered another crisis in 2013, related to a problem with the reaction wheels that typically keep the spacecraft steady.

NASA saved it back then, and set the spacecraft on a new mission called K2, to study supernovas, star clusters and far-off galaxies.

The latest failure, which NASA described as leaving the spacecraft in a "fuel-intensive coma," was discovered on April 8.

Engineers on Earth were able to rescue Kepler and restored its ability to collect data on April 22.