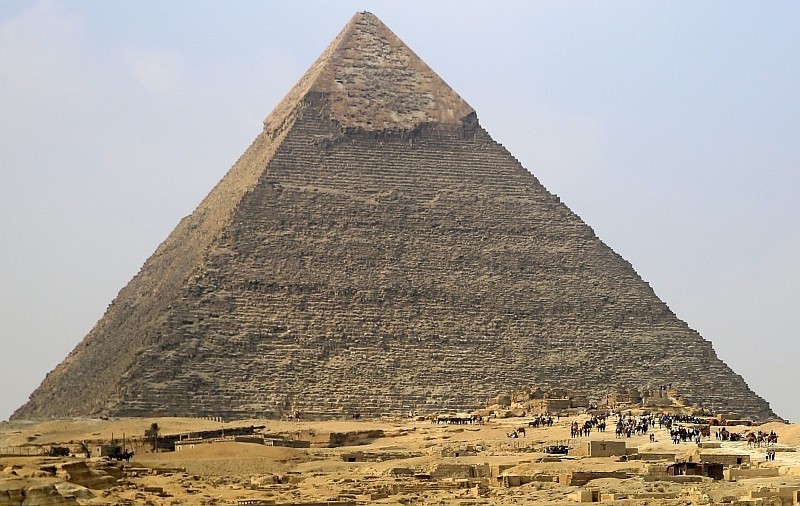 Local and foreign tourists visit the Pyramid of Khufu, the largest of the Great Pyramids of Giza. (AP Photo)
by Associated Press Jun 02, 2016 12:00 am

What mysteries might still be hidden under Egypt's pyramids? A team accompanied by Egypt's former antiquities minister and famed archaeologist Zahi Hawass are testing a new scanner on the Great Pyramid of Giza on Thursday, hoping that modern technology could help unlock ancient secrets buried deep beneath the stone.

The scanner, which uses subatomic particles known as muons to examine the 4,500 year-old burial structure, was first set up at the site last year and will complete its data collection this month.

"It's running right now, and if it manages to detect one of the three chambers we already know exist inside, then we will continue the scans," Hawass said. He has been appointed by the Antiquities Ministry to head the team that will review the scan results.

Late last year, thermal scanning identified a major anomaly in the pyramid three adjacent stones at its base which registered higher temperatures than others.

Hawass has in the past downplayed the usefulness of scans on ancient sites, saying that they have never found anything important. He has clashed publicly with British Egyptologist Nicolas Reeves, whose theory that secret burial chambers could be hidden behind the walls of King Tutankhamun's tomb was both prompted and reinforced by scanning.

For more than a decade Hawass was a celebrity starring in TV documentaries, eventually ruling the Antiquities Ministry like a pharaoh. He was dismissed from the post after Egypt's 2011 uprising that toppled longtime autocrat Hosni Mubarak and faced corruption charges, of which he was later cleared.

But back in the field following his new appointment, Hawass seemed more reluctant to criticize scanning technologies. He said they could be useful if directed by the right hands such as his.

"You need Egyptologists to oversee all this, otherwise mistakes can be made," he said. "I hope these scans will help us obtain accurate information," he said, adding that he believed another burial chamber remains undiscovered inside.