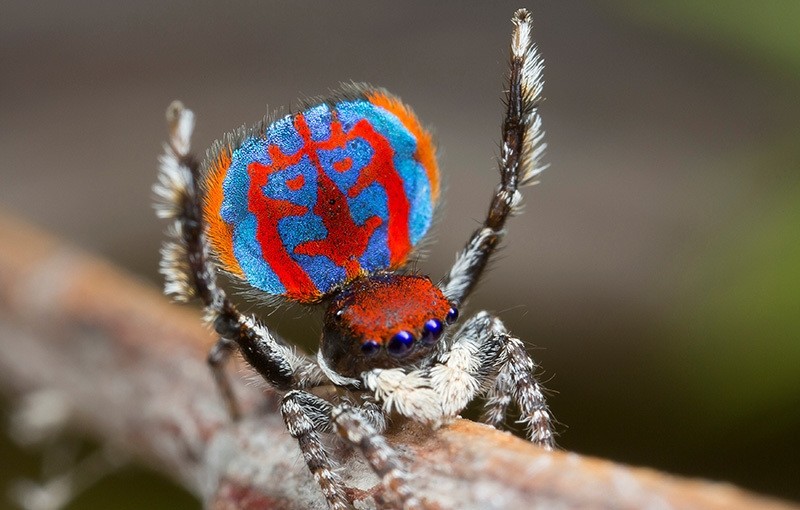 A specimen of the newly-discovered Australian Peacock spider, Maratus Bubo, shows off his colourful abdomen in this undated picture from Australia (Reuters Photo)
by Jun 06, 2016 12:00 am
A Sydney scientist has discovered seven new species of the tiny Australian peacock spider - a spectacularly coloured, three-millimetre arachnid that dances to attract a female mate.

Jurgen Otto, with the help of colleague David Knowles, made the two latest discoveries of the miniature creatures while looking for other spiders in Western Australia in November and had all seven named in the scientific journal Peckhamia last month.

"They are very, very colourful, they often have iridescent scales and they do something quite remarkable. They perform a courtship dance for females, to impress them," Otto told Reuters TV on Monday.

While footage of the dances is proving popular online, some female peacock spiders end up eating the colourful males if they are not impressed by the courtship.

The discovery of the new spiders means there are now 48 known species, found mostly in southern Australia and which range in size from three to five millimetres. Juveniles measure just half-a-millimetre.

The Sydney scientist, who studies mites during the day, developed a passion for the tiny spiders in 2005 after discovering an arachnid on a photograph he took following a bushwalk in Ku-ring-gai Chase National Park, New South Wales.

Otto said the dancing spiders, who offer no threat to humans, were even proving popular with arachnophobes.

"They are harmless, they are cute, they are colourful, they remind people of their own cat. I often compare them with kittens with too many legs, so really people get excited when they see them," he said.

"People who hate spiders confess that they actually can't help loving these ones and in time this will just change the opinions people have of spiders, I hope."