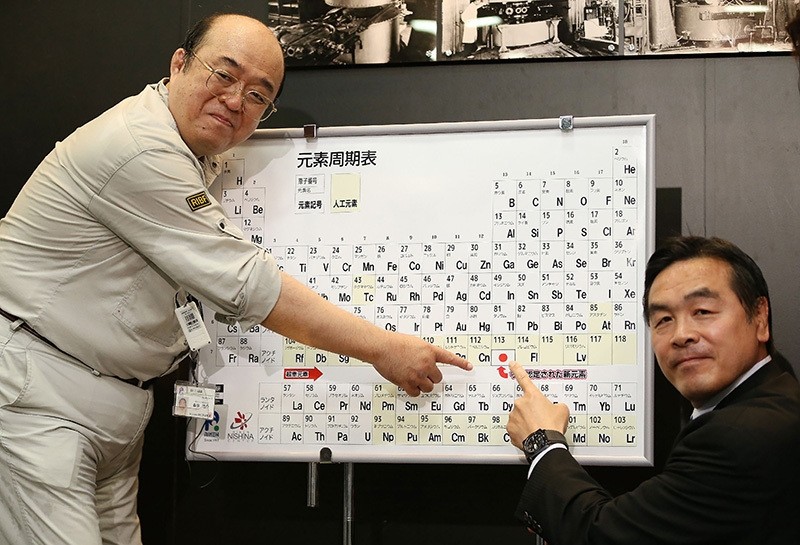 Kosuke Morita (L), who led the team at Riken institute that discovered the superheavy synthetic element, and Hiroshi Hase (R), Minister of Science and Technology, pose with a board displaying the new element 113. (AFP Photo)
by Jun 10, 2016 12:00 am
Japanese scientists behind the discovery of element 113, the first atomic element found in Asia indeed, the first found outside Europe or the United States have dubbed it "nihonium" after the Japanese-language name for their country.

"I believe the fact that we, in Japan, found one of only 118 known atomic elements gives this discovery great meaning," said
Kosuke Morita, a university professor who led the discovery team from the RIKEN Nishina Center for Accelerator-Based Science.

"Another important meaning is that until now, all the elements in the periodic table have been discovered in Europe and the United States," he told a news conference on Thursday.

"There has not been a single atomic element found in Asia, Oceania or Africa."

Element 113 was first found in 2004, and the number refers to its atomic number, or the number of protons in the nucleus of the atom. It does not exist naturally and has had to be synthesized.

Though the element was publicly recognised by the International Union of Pure and Applied Chemistry (IUPAC) in December 2015, the name was not announced by IUPAC until Wednesday. It will become permanent after a five-month public review.

It will also not be the only element to be named after a country, having been proceeded by polonium and francium after the places they were discovered.