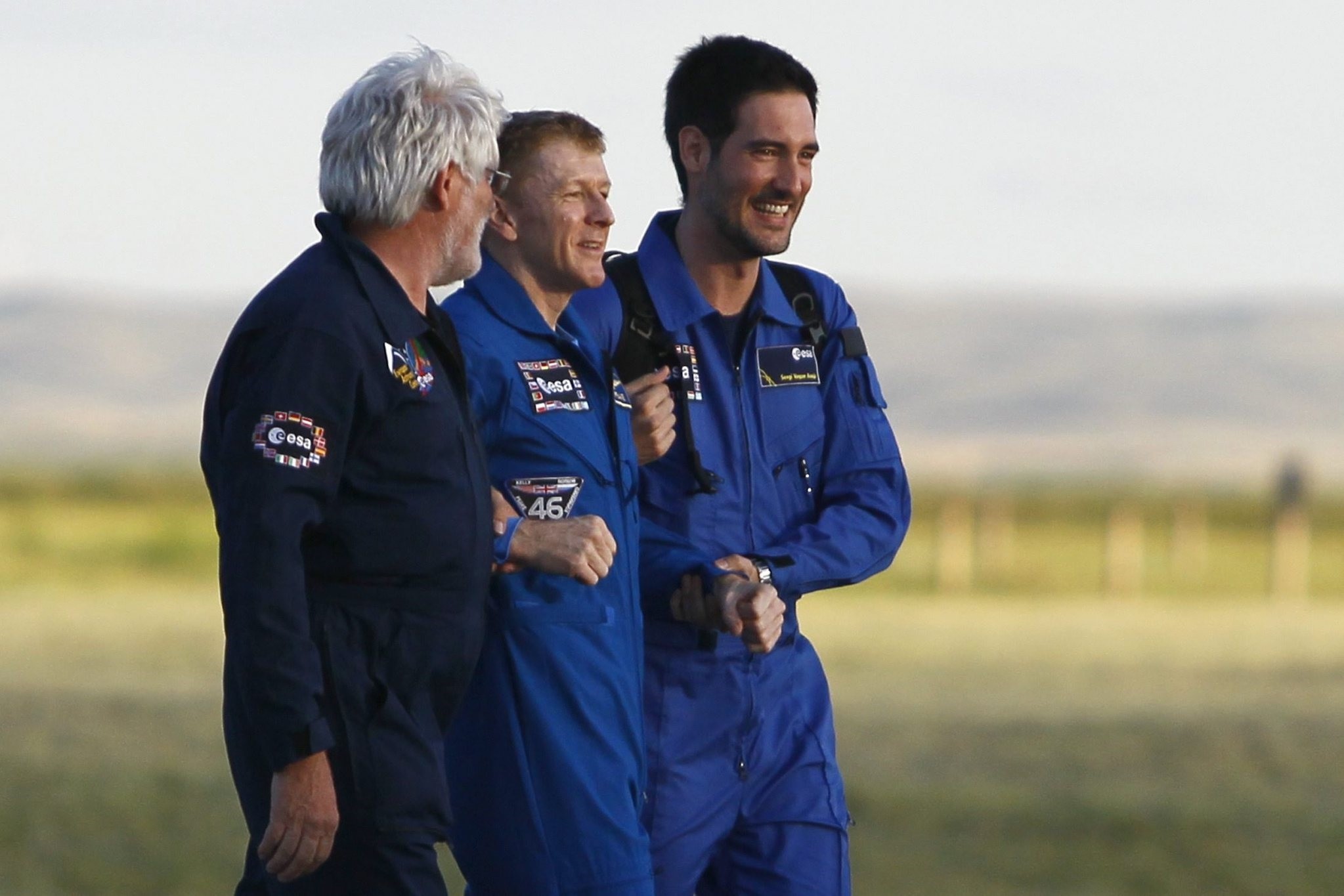 International Space Station (ISS) crew member Timothy Peake (C) of Britain is assisted by ground personnel upon his arrival at the airport of Karaganda, Kazakhstan, 18 June 2016. (EPA Photo)
by reuters
Jun 18, 2016 12:00 am

A soyuz capsule bringing back three astronauts from the International Space Station, including the first to represent the British government, made a safe parachute landing on the steppe near the Kazakh city of Zhezkazgan on Saturday.

The crew, which included a Russian and an American as well as Britain's Tim Peake, left the space station about three hours earlier after spending half a year in Earth's orbit.

The capsule landed on its side, a frequent occurrence in the windy steppe area, after parachuting for 14 minutes. A search and recovery team quickly extracted the trio from the capsule.

Peake smiled as he was being examined by flight surgeons and told reporters he was enjoying "the smells of Earth" and fresh air, a stark contrast to the artificial atmosphere and high temperature inside the capsule.

Alongside were commander Yuri Malenchenko, who quickly put on sunglasses to shield his eyes from the midday sun, and NASA astronaut Tim Kopra.

Former army major Peake, who turned 44 aboard the station, was on a mission for the European Space Agency (ESA) and became the first astronaut wearing a Union Jack flag on his arm. The first Briton in space was Helen Sharman, who traveled on a Soviet spacecraft for eight days in 1991.

Peake's mission, called Principia after Isaac Newton's seminal work, included a number of scientific experiments, such as testing the use of nitric oxide gas as a tool to monitor lung inflammation.

During his 186-day stint in space, Peake ran a marathon strapped to a treadmill and held a science lesson for 300,000 schoolchildren.

Peake had also taken with him two tiny Raspberry Pi educational computers set up to measure the space station's environment, follow its journey through space, and pick up the Earth's magnetic field, as well as give schoolchildren the chance to have their computer code run in space.