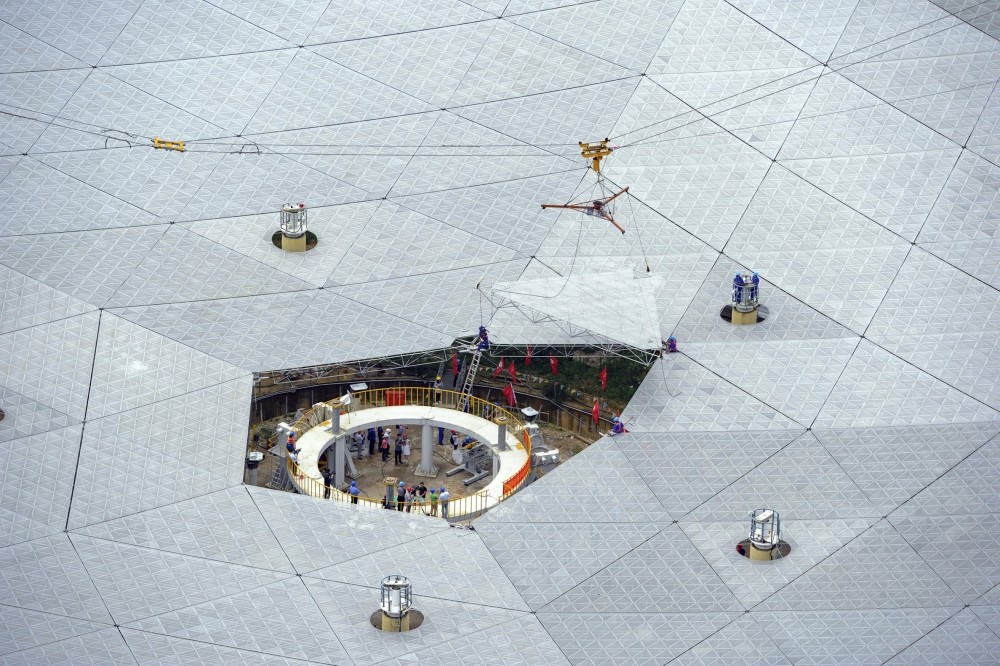 by Jul 04, 2016 12:00 am
China on Sunday hoisted the final piece into position on what will be the world's largest radio telescope, which it will use to explore space and help in the hunt for extraterrestrial life, state media said. The Five-hundred-metre Aperture Spherical Telescope, or FAST, is the size of 30 football fields and has been hewed out of a mountain in the poor southwestern province of Guizhou. Scientists will now start debugging and trials of the telescope, Zheng Xiaonian, deputy head of the National Astronomical Observation under the Chinese Academy of Sciences, which built the telescope, told the official Xinhua news agency.

"The project has the potential to search for more strange objects to better understand the origin of the universe and boost the global hunt for extraterrestrial life," the report paraphrased Zheng as saying. The 1.2-billion yuan ($180 million) radio telescope would be a global leader for the next one to two decades, Zheng added. The telescope, which has taken about five years to build, is expected to begin operations in September.

Advancing China's space programme is a priority for Beijing, with President Xi Jinping calling for the country to establish itself as a space power. China's ambitions include putting a man on the moon by 2036 and building a space station, work on which has already begun.

China insists its programme is for peaceful purposes, but the U.S. Defense Department has highlighted China's increasing space capabilities, saying it is pursuing activities aimed to prevent adversaries from using space-based assets in a crisis.