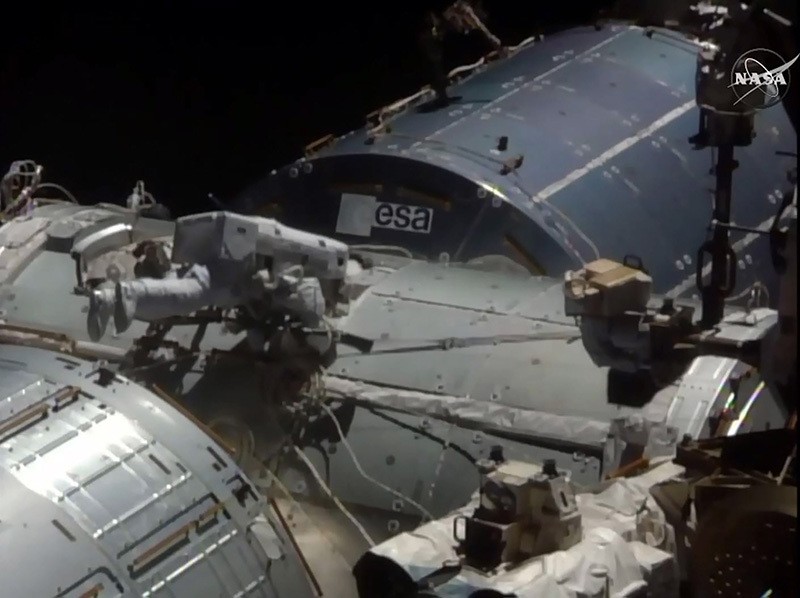 This NASA TV video grab shows US astronaut Kate Rubins viewed near the docking port on August 19, 2016 at the International Space Station. (AFP Photo / NASA TV)
by Aug 20, 2016 12:00 am
Two NASA astronauts completed a six-hour spacewalk outside the International Space Station on Friday to install a parking spot for upcoming commercial space taxis, which will end U.S. reliance on Russia for rides to the orbiting outpost.

"Great view," said Rubins, who made her first spacewalk.

Since grounding the shuttle fleet in 2011, the United States has been dependent on Russia to ferry astronauts to and from the space station, at a cost of more than $70 million per person.

During Friday's spacewalk, Williams and Rubins attached an adapter onto the shuttle's docking port that will allow commercial space taxis under development by Space Exploration Technologies and Boeing to park at the station, a $100 billion research laboratory that flies about 250 miles (400 km) above Earth.

"It's a gateway to a new era in commercial space," said NASA mission commentator Rob Navias.

California-based SpaceX, owned and operated by technology entrepreneur Elon Musk, plans to begin test flights of its new passenger Dragon capsule to the station in 2017.

Boeing's debut flight of its CST-100 Starliner capsule is expected in 2018.

NASA had hoped to have the first of two new docking ports installed last year, but the equipment was destroyed during a SpaceX cargo ship launch accident in June 2015.

A replacement docking port is under construction and expected to be delivered to the station in early 2018.

On Friday, Williams and Rubins routed a cable for the second docking port's installation in early 2018.

The astronauts had planned to tackle a few other lower-priority maintenance tasks, but NASA decided to end the spacewalk after an intermittent communications problem developed with Williams' spacesuit, Navias said.

Williams and Rubins are scheduled to make another spacewalk on Sept. 1 to retract a solar array cooling panel that is no longer being used and to install a high-definition television camera on the station's exterior frame.