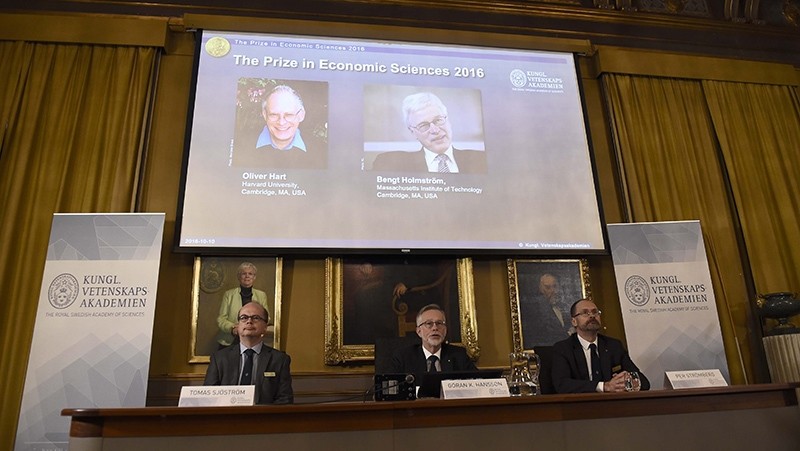 British-American academic Oliver Hart and Finland's Bengt Holmstrom win the 2016 Nobel Prize in Economic Sciences for "their contribution to contract theory," the Royal Swedish Academy of Sciences announced on Monday.

"This year's laureates have developed contract theory, a comprehensive framework for analysing many diverse issues in contractual design, like performance-based pay for top executives, deductibles and co-pays in insurance, and the privatisation of public-sector activities," the jury said.

"The new theoretical tools created by Hart and Holmstrom are valuable to the understanding of real-life contracts and institutions, as well as potential pitfalls in contract design."

Their groundbreaking work has laid "an intellectual foundation" for designing policies and institutions in many areas, from bankruptcy legislation to political constitutions.

Hart, born in 1948, is an economics professor at Harvard University in the United States, while Holmstrom is a professor of economics and management at Massachusetts Institute of Technology.

Last year, the award went to US-British researcher Angus Deaton for his groundbreaking work on poverty.

The economics prize is unique among the Nobel awards in that it was created by the Swedish central bank in 1968 -- the others were all set up through the 1895 will of Swedish inventor and philanthropist Alfred Nobel.

The economics prize is the fifth of the six Nobel prizes to be announced this year.

Last week, the awards for medicine, physics, and chemistry were announced, as well as the peace prize, which went to Colombia's President Juan Manuel Santos for his efforts to end a half-century war with the FARC rebels.

The final prize, for literature, will be announced Thursday.

For that award, the Swedish Academy could tap a superstar novelist such as Philip Roth of the United States or Haruki Murakami of Japan, or a lesser-known writer such as Norwegian playwright Jon Fosse or Syrian poet Adonis.

The Nobel prize consists of a diploma, a gold medal and cheque for eight million Swedish kronor (828,000 euros, $928,000), which the laureates will receive at a ceremony in Stockholm on December 10.