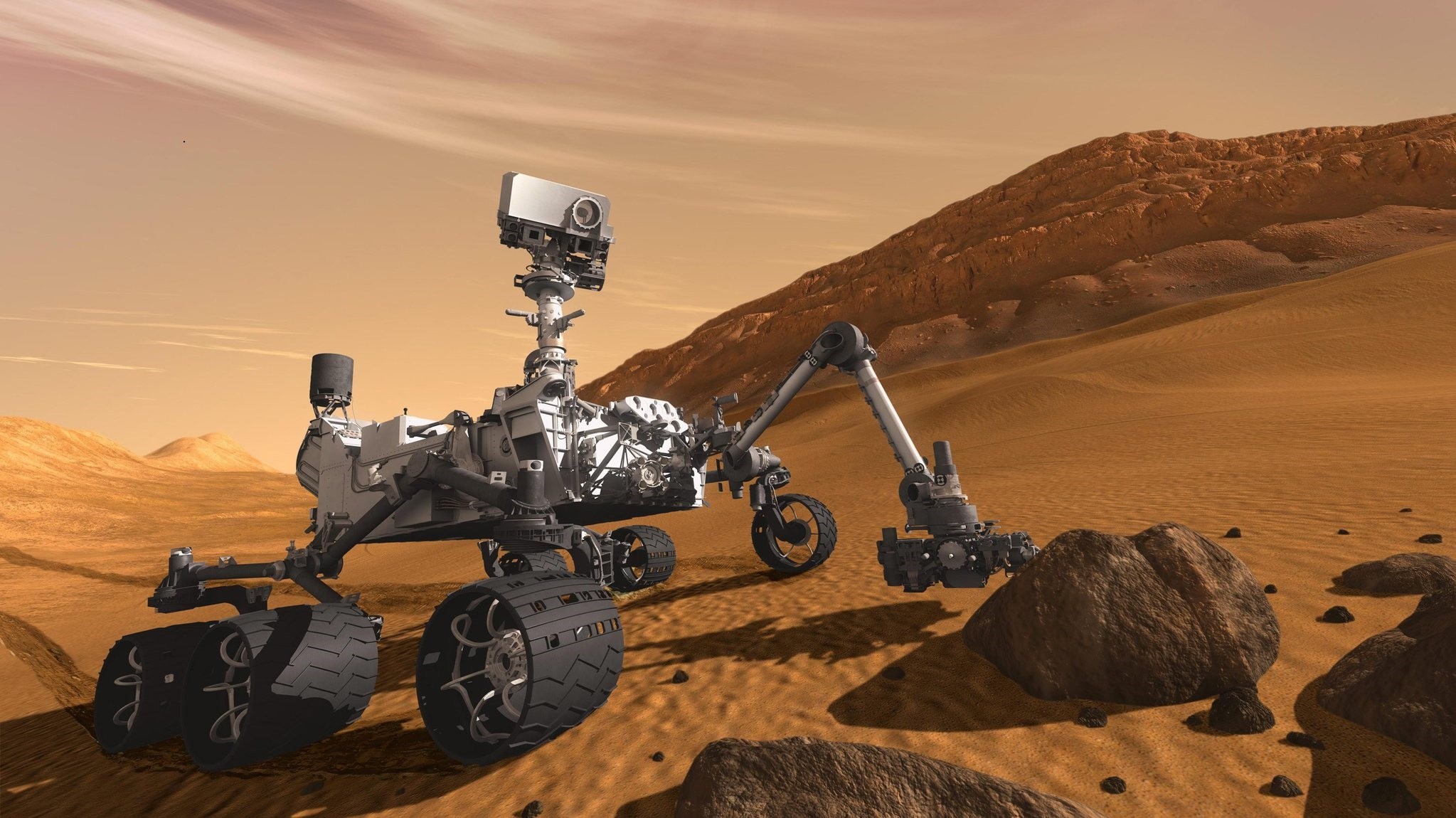 In this 2011 artist's rendering provided by NASA/JPL-Caltech, the Mars Science Laboratory Curiosity rover examines a rock on Mars with a set of tools at the end of its arm, which extends about 2 meters. (AP Photo)
by Dec 02, 2016 12:00 am

European ministers approved a 1.4-billion-euro ($1.5-billion) lifeline Friday for plans to place a life-seeking rover on Mars and maintain a presence on the International Space Station.

Funding for the prestige projects represented a big chunk of investments totalling 10.3 billion euros approved at a two-day meeting of the European Space Agency (ESA) ministerial council, its boss announced.

Cash concerns have long cast a shadow over Europe's plans to finally send a rover to Mars and to remain involved in the ISS with partners America, Canada, Japan and Russia.

ESA had warned ahead of the meeting in Lucerne, Switzerland, that the talks could be "challenging" given "the current economic and political situation in Europe".

Matters were not helped by a 230-million-euro test lander, designed to lay the groundwork for the planned rover, smashed into the Red Planet in October.

But ESA director general Jan Woerner announced Friday that ministers from ESA's 22 member states plus Slovenia and Canada, which constitute the council, had agreed on "a big amount of money for the future."

"It allows us to really go forward," he said at a press conference webcast from Lucerne.

The government portfolios of the "space ministers" present ranged from trade, economy and technology to higher education.

Some 3.8 billion was earmarked for ESA science, research and development up to 2021, 1.3 for telecommunications projects until 2024, and 1.6 billion for satellite launchers until 2023.

The lander had been designed to test atmospheric and landing gear for a rover whose planned launch has already been delayed from 2018 to 2020 over funding concerns.

The rover will be equipped with a drill to search for signs of life -- past or present -- under the martian surface.

ESA had previously budgeted 1.5 billion euros for ExoMars, a joint project with Russia, which also includes a satellite placed in our neighbouring planet's orbit in October.

The ministers on Friday also ended uncertainty over Europe's role in the ISS beyond 2020.

The other participating countries had long agreed to operate and finance the orbiting science platform until at least 2024.

"We can now also confirm we are going to 2024 with the International Space Station," Woerner said.

The ministers further agreed to press ahead with building a "service module" for NASA's planned Orion spacecraft, meant to transport crews to the ISS, the Moon and beyond.

The meeting came at a time of strained relations between ExoMars partners Europe and Russia over differences on Ukraine and Syria, as well as uncertainty over ISS-lead America's direction under president-elect Donald Trump.

With Friday's budget approval, "Europe has placed itself in a good position... at a time that new competitors and uncertainties are emerging," France's state secretary for education Thierry Mandon, a member of the council, told AFP.

Woerner said he would have meetings next week with NASA bosses, including its administrator Charlie Bolden.

As Trump's plans become clearer, "we have contacts to NASA to get the best information what does it mean also for the cooperation between NASA and ESA," he said.

"I cannot tell you anything about my expectations for the future. This is much too early."

ESA was prompted to turn to Russia on ExoMars after US budget cuts led to NASA withdrawing from the mission in 2012.

Many fear Trump will make further cuts, endangering US and international space programmes, including the ISS.