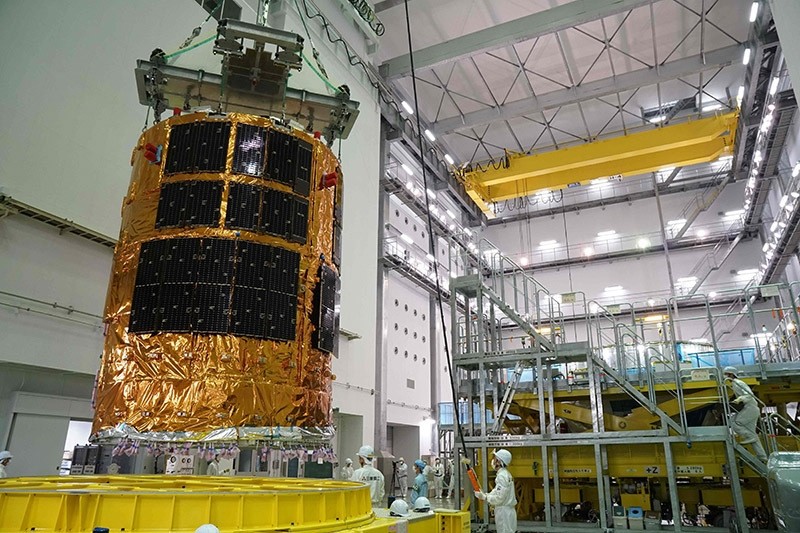 The unmanned cargo spacecraft, ,Kounotori,, is being assembled at the Tanegashima Space Center in Tanegashima island, Kagoshima prefecture on 6 July 2016. (AFP Photo)
by Dec 09, 2016 12:00 am

Japan launched a cargo ship Friday bound for the International Space Station, carrying a 'space junk' collector that was made with the help of a fishnet company.

The vessel, dubbed "Kounotori" (stork in Japanese), is to blast off from the southern island of Tanegashima around 10:30 pm local time (0130 GMT) attached to an H-IIB rocket.

Scientists at the Japan Aerospace Exploration Agency (JAXA) are experimenting with a tether to pull junk out of orbit around Earth, clearing up tons of space clutter including cast-off equipment from old satellites and pieces of rocket.

More than 50 years of human space exploration since the Soviet-launched Sputnik satellite in 1957 has produced this hazardous belt of orbiting debris.

There are estimated to be more than 100 million pieces in orbit, posing a growing threat to future space exploration, scientists say.

Researchers are using a so-called electrodynamic tether made from thin wires of stainless steel and aluminum.

The idea is that one end of the strip will be attached to debris which can damage working equipment -- there are hundreds of collisions every year.

The electricity generated by the tether as it swings through the Earth's magnetic field is expected to have a slowing effect on the space junk, which should, scientists say, pull it into a lower and lower orbit.

Eventually the detritus will enter the Earth's atmosphere, burning up harmlessly long before it has a chance to crash to the planet's surface.

JAXA worked on the project with Japanese fishnet manufacturer Nitto Seimo to develop the cord, which has been about 10 years in the making.

Previous experiments using a tether have been done in recent years.

A spokesman for the space agency said it hopes to put the junk collection system into more regular use by the middle of the next decade.

"If we are successful in this trial, the next step will be another test attaching one tip of the tether to a targeted object," he added.

The cargo ship launched Friday is also carrying other materials for the ISS including batteries and drinking water for the astronauts living there.