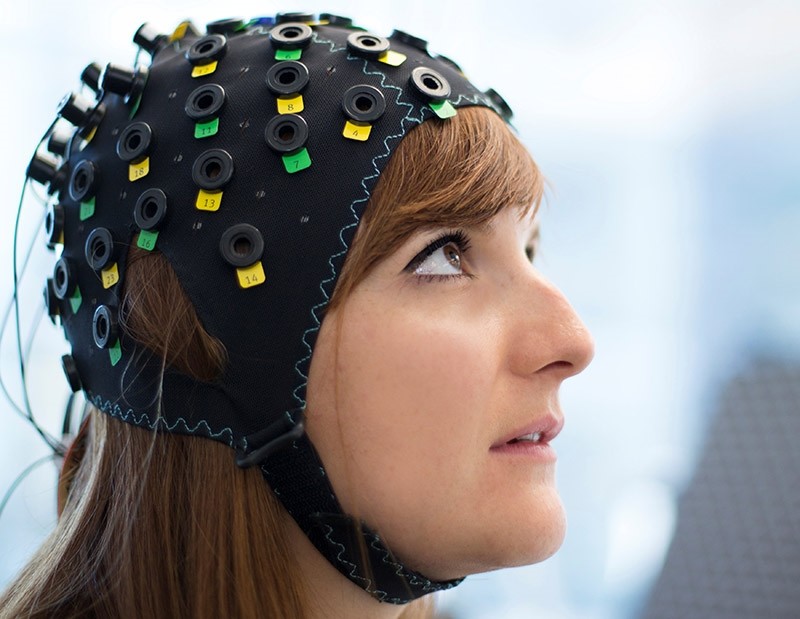 The NIRS/EEG brain-computer interface system is worn by a model in Switzerland in this undated photograph released in London, Britain, January 31, 2017. (Reuters Photo)
by reuters
Feb 01, 2017 12:00 am

Scientists have developed a brain-computer interface that reads the brain's blood oxygen levels and enables communication by deciphering the thoughts of patients who are totally paralyzed and unable to talk.

In a trial of the system in four patients with complete locked-in syndrome - incapable of moving even their eyes to communicate - it helped them use their thought waves to respond yes or no to spoken questions.

Researchers leading this trial said the brain-computer interface (BCI), which is non-invasive, could transform the lives of such patients, allowing them to express feelings and opinion to their loved ones and carers.

Counter to expectations, the researchers said, the patients reported being "happy" despite their condition.

"The striking results overturn my own theory that people with complete locked-in syndrome are not capable of communication," said Niels Birbaumer, a neuroscientist at Switzerland's Wyss Center for Bio and Neuroengineering, who co-led the study.

The trial, published in the journal PLOS Biology on Tuesday, involved four patients with amyotrophic lateral sclerosis (ALS) - a progressive motor neuron disease that destroys the part of the nervous system responsible for movement.

"The machine records the blood flow... and calculates how (it) changes during "yes" and during "no", and the computer develops an idea, a pattern," Birbaumer told Reuters.

The "known" questions elicited correct responses seven times out of 10, and the question "Are you happy?" resulted in a consistent yes response from the four people, repeated over weeks of questioning.

John Donoghue, director of the Wyss Center, welcomed the work as "a crucial first step in the challenge to regain movement" for completely locked-in patients.

He said his team now plans to build on these results to develop the technology further and eventually aim for it to be available to people with paralysis resulting from ALS, stroke, or spinal cord injury.