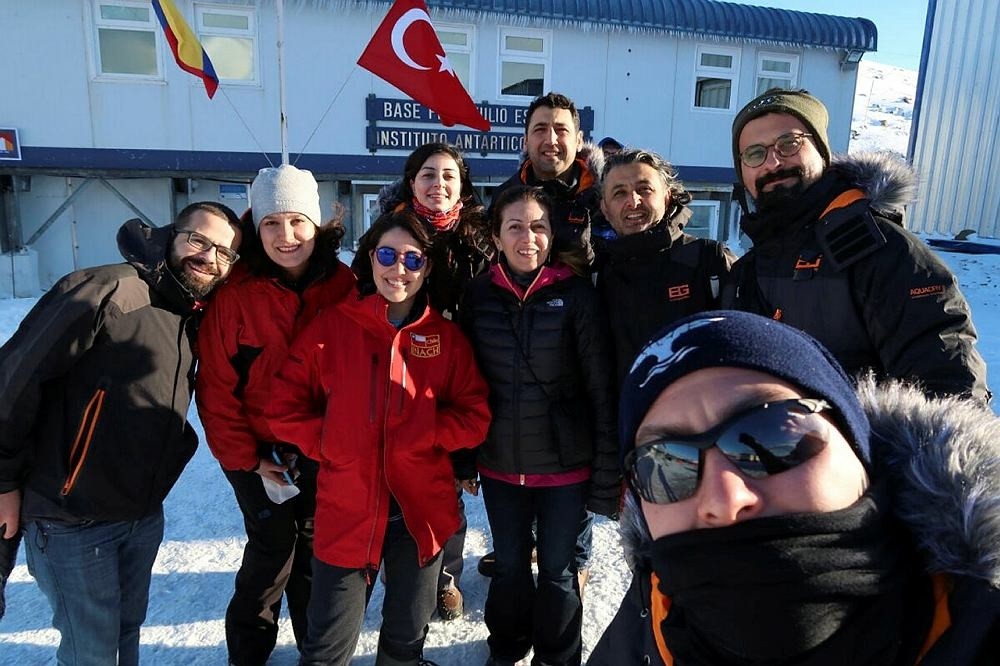 The science team including Burcu u00d6zsoy (3rd on right).
by Anadolu Agency Mar 09, 2017 12:00 am
A Turkish female scientist is leading the team working to set up the nation's first-ever scientific research base in Antarctica. With their hard work and determination despite punishing weather on the bottom of the world, the nine-member team has caught the admiration of the Turkish public.

The team leader, Istanbul Technical University's Burcu Özsoy, told Anadolu Agency about their progress in setting up the base and how they are adapting to Antarctica's sub-zero chill. Özsoy said that on Feb. 24 the team began looking for the best site for the base, traveling in a rented ship, and facing difficulties in their first days in Antarctica due to a violent storm.

She said that even though the continent is almost in the middle of summer, the temperature is still well below freezing, and so they have to wear special thermal protective gear. Özsoy, the founder and head of the Istanbul Technical University Polar Research Center, said that the team managed to avoid any health problems by wearing warm clothes and keeping their energy up with sandwiches, dried nuts and fruits, and chocolate.

"Antarctica is patched into a few satellite systems, and there are hitches in the communication. We don't have any communication channels except for limited quotas and e-mails and emergencies," she said. "We're staying in touch with our families and colleagues via e-mails transmitted every four hours. The e-mails are text-only and there's a size limit of 25 kilobytes."

Speaking about the research they do in Antarctica, she said that only 1 percent of the continent is potentially livable. "In order to do research on the continent, the zone has to be legally out of the protected area, it has to be in a productive spot logistically with a natural harbor structure, and it can't be on a glacier so there's living space," she stated.

Özsoy said fully 98 percent of the continent is covered in ice. Located at the bottom of the southern hemisphere, Antarctica is the only continent which has no countries. Özsoy also thanked President Recep Tayyip Erdoğan and Science, Industry and Technology Minister Faruk Özlü for enabling them to fly the Turkish flag in Antarctica. Turkey's first research base in Antarctica will be set up next year, Science Minister Faruk Özlü said last week.

A team of nine scientists set off for the continent last month to conduct feasibility studies at sites in the frozen wilderness. "We will establish a base here," Özlü told Anadolu Agency's Editors' Desk. "We will conduct scientific research. We will stay there."

Last April, the first-ever Turkish team of researchers - 14 medics, botanists, geologists and oceanographers from seven universities - travelled to Antarctica to study the impact of climate change. "The base will probably be established in 2018," Özlü said. Remarking on the 53 nations that have established bases, he added: "Turkey will have a base in Antarctica as well.

"The buildings and structures that we will install will be made in Turkey and we will send them by ship." The team from the Istanbul Technical University Polar Research Center, which was established in 2015, is due to return within a month to avoid the onset of the harsh Antarctic winter, when temperatures can drop to minus 80 degrees Celsius.
RELATED TOPICS