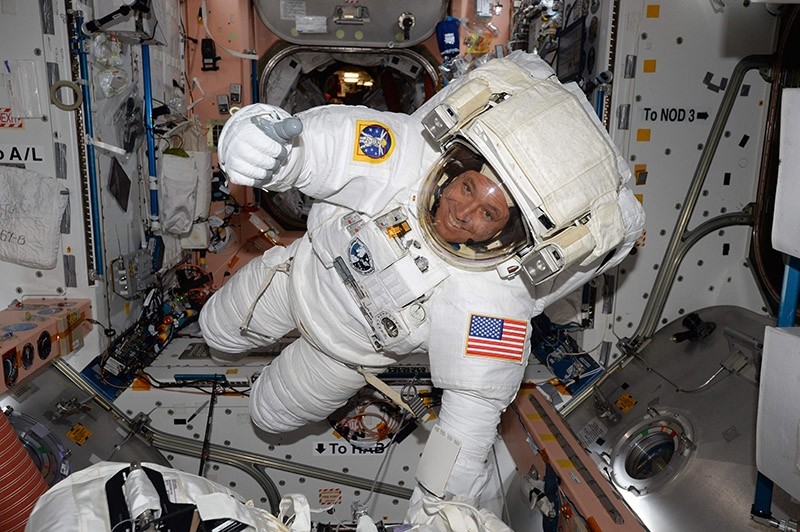 This NASA handout photo obtained May 12, 2017 shows Expedition 51 Flight Engineer Jack Fischer of NASA seen inside the International Space Station (ISS) in his spacesuit during a fit check, in preparation for a spacewalk on May 12, 2017. (AFP Photo)
by May 12, 2017 12:00 am

NASA said on Friday it would revamp plans for a spacewalk outside the International Space Station after a cable that supplies power, oxygen, cooling water and communications to one of the astronaut's spacesuits started to leak.

The problem delayed the start of what will be the 200th spacewalk in support of station assembly and maintenance since construction began in 1998 on the $100-billion laboratory that flies about 250 miles (400 km) above Earth.

Station commander Peggy Whitson, a veteran with eight previous spacewalks, and rookie flight engineer Jack Fischer, who will be making his first outing, shared a second good cable known as an umbilical as they prepared to leave the station's airlock, said mission commentator Rob Navias.

The highest-priority tasks for the spacewalk, which had been slated to last 6 1/2 hours, are to replace a 200-pound electronics box that routes commands and data to experiments, and to install equipment to troubleshoot a cooling system problem with the station's $2 billion dark matter detector.

Americans Whitson and Fischer also plan to install a wireless communications antenna and a high-definition TV camera, and to attach a debris shield onto an exposed docking port that is being prepared for commercial space taxis under development by Space Exploration Technologies and Boeing Co.