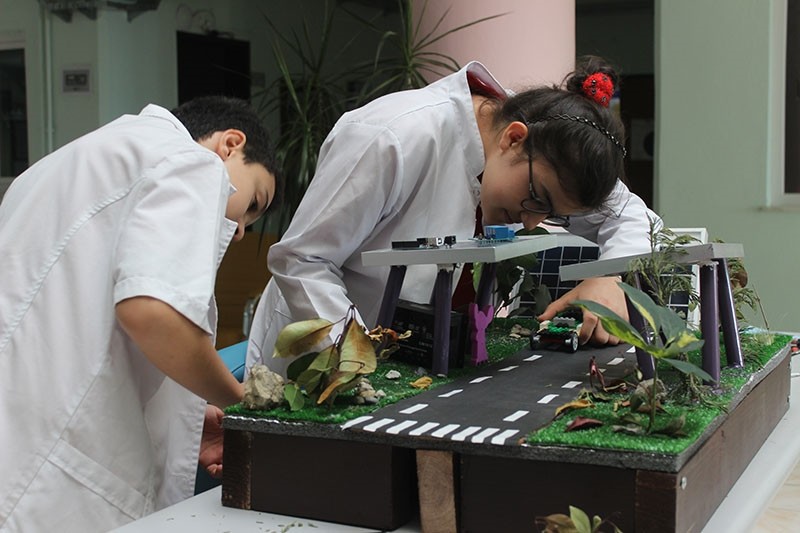 Two Turkish students have designed a road powered by solar energy that will reduce the metrobus public transport system's fuel consumption by 90 percent.

The project, designed by students from the Atatürk Science and Art Center in Çınarcık district of the western Turkish city of Yalova, was among 1,200 ideas presented at the Turkish Airlines Bursa Science Fair in May. While the project did not take home the grand prize, it was one of the completion's top 15 projects and won an honorable mention.

The students' design relies heavily on solar panels and electromagnets. Within the scope of the project, solar panels located above the metrobus stations would collect energy, to be stored in accumulators, that would then be sent underground for transfer to metrobus carriages by means of electromagnets.

Students attending the center for special abilities and high intelligence work mainly in workshops and laboratories, often participating in local and international competitions.

Science teacher İnanç Feridun Çancı noted that the students' starting point for the project was energy efficiency, "Engineers who liked our project have gotten in touch with us and said that they will work on a joint project with us. Later on in the development stage I think we will benefit from experienced people."

The project's architect, student Beyzanur Özker, explained that the Metrobus in Istanbul was powered by something similar to a hybrid system.

"A hybrid system is one that includes both a diesel motor and an electric motor. One improvement in our project is that there is no weight from an electric motor, because we have magnets instead. Also, because the electromagnets are not working constantly, it saves energy," Özker said.

Fellow student Efe Can Kutlu added that the system could be installed easily.

"Because the metrobus has its own road, it does not come into contact with other vehicles, which makes implementation easier. In Istanbul, 247 metrobuses work at the same time, making 3,562 journeys a day. When we calculate its diesel costs, it comes to TL 392,218, and that's just the daily expense," he said.

Opened in 2007, Istanbul's Metrobus carries some 700,000 passengers daily along its route across the European and Asian sides of the city.