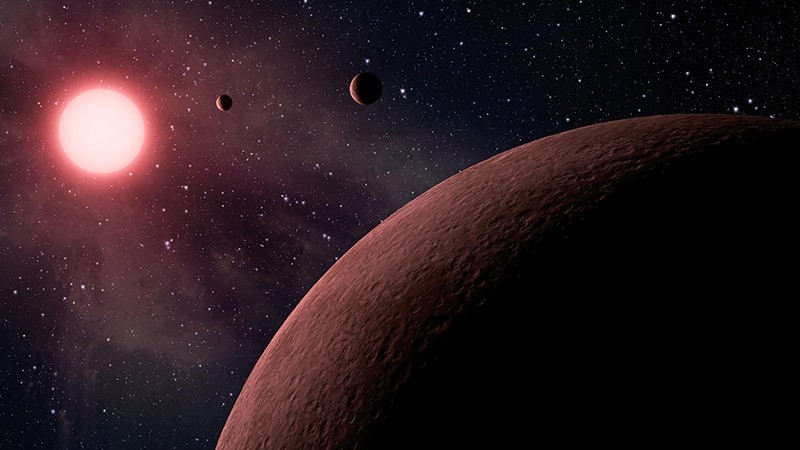 An undated handout photo made available by NASA on 20 June 2017 shows an artist's concept depicting an itsy bitsy planetary system. (EPA Photo)
by Compiled from Wire Services Jun 20, 2017 12:00 am

Astronomers on Monday added 219 candidates to the growing list of planets beyond the solar system, 10 of which may be about the same size and temperature as Earth, boosting the chances for life.

Scientists found the planet candidates in a final batch of NASA's Kepler Space Telescope observations of 200,000 sample stars in the constellation Cygnus.

The collection of Earth-like planets also orbit their stars in the so-called "habitable zone"-meaning surface temperatures could support liquid water and, hypothetically, life.

"An important question for us is, 'Are we alone?'" Kepler program scientist Mario Perez said in a conference call with reporters. "Maybe Kepler today is telling us indirectly ... that we are not alone."

The National Aeronautics and Space Administration launched the Kepler telescope in 2009 to learn if Earth-like planets are common or rare. With the final analysis of Kepler data in hand, scientists said they will now work on answering that question, a key step in assessing the chance that life exists beyond Earth.

During a four-year mission, Kepler found 2,335 confirmed planets and another 1,699 candidates, bringing its tally to 4,034. That number includes about 50 worlds that may be about the same size and temperature as Earth.

The Kepler telescope constantly studies a wide range of stars and notes whenever there is a miniscule shift in the amount of light each star emits. The shift is often caused by a planet passing between the telescope and the distant star.

By studying Kepler's data, scientists can determine if a planet is a massive gas giant like Jupiter or a small, rocky world like Earth. Overall, the research is broadening understanding of the universe's demographics.

Including other telescope surveys, scientists have confirmed the existence of nearly 3,500 planets beyond the solar system.

"It's like finding what we thought was a single species of animal is really two different things," said Benjamin Fulton, a graduate student in astronomy who analyzed the Kepler data.

"It is interesting that we don't have what appears to be the most common type of planet in the galaxy," Fulton said.