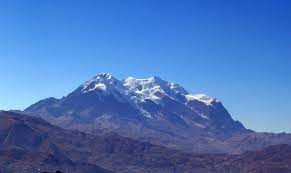 The international ICE Memory project team braved low oxygen and bitter, ice-cold wind that whipped them mercilessly at an altitude of 6,300 meters to drill deep into the glacier and pull out two cylinders of ice.

The weather was too dangerous for the team to extract a third sample as originally planned.

The ICE Memory project members, which have completed a similar task at Mont Blanc in the Alps, will take their samples to a research station in Antarctica.

One of the samples will be studied, and the other one preserved.

Their goal is to create an "ice archive sanctuary in Antarctica ... in an effort to preserve ice cores from the world's key endangered glaciers," according to the group's website, which is sponsored by the French and Italian national commissions for UNESCO.

That way, future scientists "will still have enough high-quality raw material to investigate and make future discoveries," says the site.

The team of 15 scientists from France, Russia, Brazil and Bolivia, supported by some 30 porters and guides, faced extreme conditions in their May 22-June 18 quest for the ice samples.

One of the samples taken reached all the way down to the bedrock at a depth of 137 meters into the glacier, and the second to 134 meters, ICE Memory said. These long shafts of ice were then cut into smaller lengths and taken away in heatproof cylinders.

The samples were treated as precious relics once they were returned to base camp and carefully stored for transportation.

Scientists say that the glacier at Mount Illimani has 18,000 years' worth of weather and environmental data for a broad region between the Bolivian highlands and the country's Amazon rainforest region.

Mount Illimani, located in La Paz department, is part of the Cordillera Real, one of Bolivia's two ice and snow covered mountain ranges.

The glaciers, however, are threatened by global warming and mining activity, something locals have complained about this year.

ICE Memory "is a wonderful adventure in collaboration and trust among nations, scientists and private sponsors who embrace their duty to address global warming," said Jerome Chappellaz, director of France's National Center for Scientific Research and also the scientific coordinator for the glacier project.

Chappellaz said in March that the archives of climate data at the bottom of glaciers are in danger due to global warming.

As temperatures rise, water leaks into the glaciers and washes away geochemicals that scientists seek to study.

In April, thousands of native people who live around Mount Illimani brought the capital La Paz to a standstill as they marched in protest demanding that the glacier be preserved.

They want the government to pass a law declaring it to be part of Bolivia's natural heritage and bar any activity that will contaminate melted glacier runoff that they use for farming.