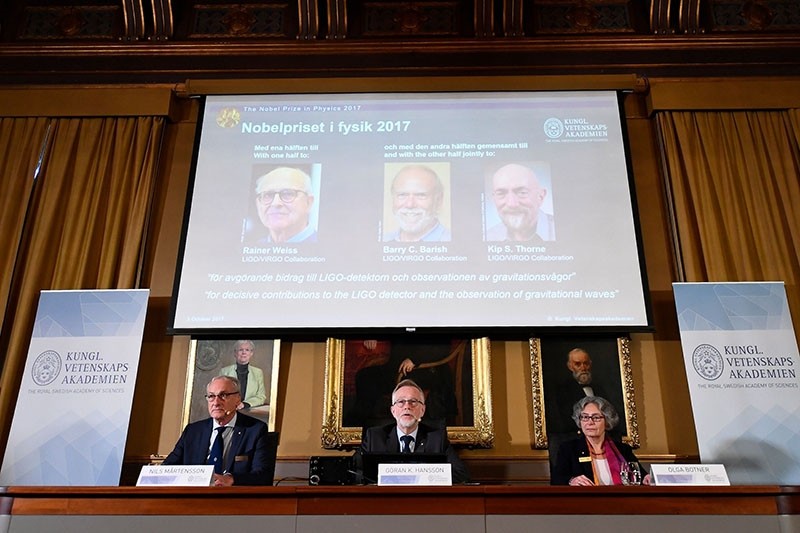 The Nobel Physics Prize 2017 has been awarded to three scientists for their discoveries in faint ripples flying through the universe called gravitational waves — proof of a theory developed by Albert Einstein a century ago and that scientists say fundamentally alters our understanding of the universe.

The three were key to the first observation of gravitational waves in September 2015.

When the discovery was announced several months later, it was a sensation not only among scientists but the general public.

"The best comparison is when Galileo discovered the telescope, which allowed us to see that Jupiter had moons and all of a sudden we discovered that the universe was much vaster than we used to think about. With this discovery we can study processes which were completely impossible, out of reach to us in the past," said Ariel Goobar of the Royal Swedish Academy of Sciences.

With the technology that the three developed "We may even see entirely new objects that we haven't even imagined yet," said Patrick Sutton, an astronomer at Cardiff University in Wales.

Weiss, in a phone call with the announcement news conference at the Swedish academy, said "I view this more as a thing that recognizes the work of a thousand people."

Gravitational waves are extremely faint ripples in the fabric of space and time, generated by some of the most violent events in the universe.

The waves detected by the laureates came from the collision of two black holes some 1.3 billion light-years away. A light-year is about 5.88 trillion miles.

The waves were predicted by Einstein a century ago as part of his theory of general relativity. General relativity says that gravity is caused by heavy objects bending space-time, which itself is the four-dimensional way that astronomers see the universe. 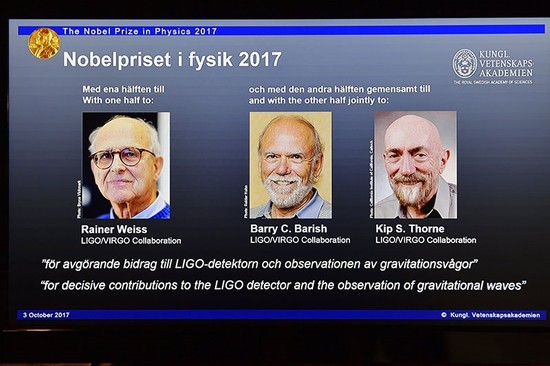 The German-born Weiss was awarded half of the 9-million-kronor ($1.1 million) prize amount and Thorne and Barish will split the other half.

The announcement said Einstein was convinced that gravitational waves could never be measured. The laureates used laser devices "to measure a change thousands of times smaller than an atomic nucleus."

In a moment of poetry aimed at making the distant and infinitesimal phenomenon understandable to non-experts, the academy announcement said gravitational waves "are always created when a mass accelerates, like when an ice-skater pirouettes or a pair of black holes rotate around each other."

For the past 25 years, the physics prize has been shared among multiple winners.

Last year's prize went to three British-born researchers who applied the mathematical discipline of topology to help understand the workings of exotic matter such as superconductors and superfluids. In 2014, a Japanese and a Canadian shared the physics prize for studies that proved that the elementary particles called neutrinos have mass.