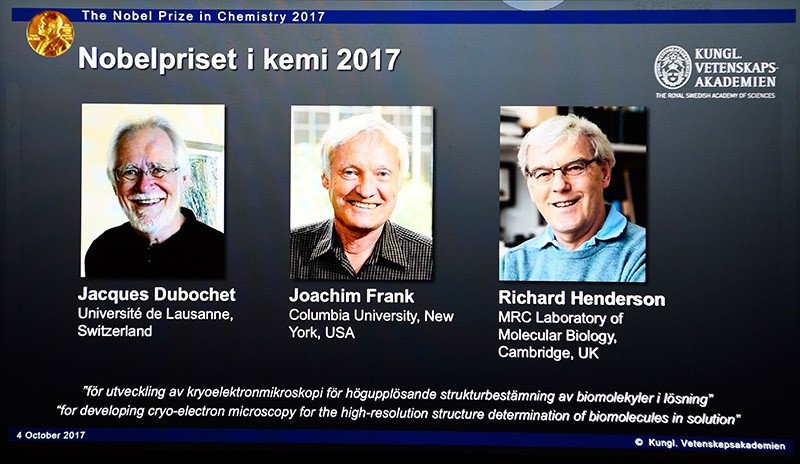 A screen displays portraits of winners of the 2017 Nobel Prize in Chemistry on October 4, 2017 at the Royal Swedish Academy of Sciences in Stockholm, Sweden. (AFP Photo)
by Compiled from Wire Services Oct 04, 2017 12:00 am

"Researchers can now freeze biomolecules mid-movement and visualize processes they have never previously seen, which is decisive for both the basic understanding of life's chemistry and for the development of pharmaceuticals," the committee added.

This method allows bio-molecules to be kept frozen in their natural state without the need for dyes or fixatives.

It is used study the tiniest details of cell structures, viruses and proteins.

"When researchers began to suspect that the Zika virus was causing the epidemic of brain-damaged newborns in Brazil, they turned to cryo-EM (electron microscopy) to visualize the virus," the committee said.

Scottish-born scientist Henderson used an electron microscope to generate a three-dimensional image of a protein at an atomic resolution, showing the potential of the technology.

His breakthrough was further developed by German-born scientist Frank while Dubochet of Switzerland used rapidly frozen water to preserve the natural shape of the biomolecules.

Chemistry is the third of this year's Nobel Prizes after the winners of the medicine and physics prizes were announced earlier this week.

The prizes are named after Alfred Nobel, the inventor of dynamite, and have been awarded since 1901 for achievements in science, literature and peace, in accordance with his will.

While the chemistry award has sometimes been overshadowed by the towering reputations of physics winners such as Albert Einstein, laureates include ground-breaking scientists such as radioactivity pioneers Ernest Rutherford and Marie Curie, though she also won the physics prize.

The award passed over one of the highest-profile fields of research, the so-called CRISPR-Cas9 gene editing technology that earlier this year allowed U.S. scientists to alter genes in a human embryo to correct a disease-causing mutation.