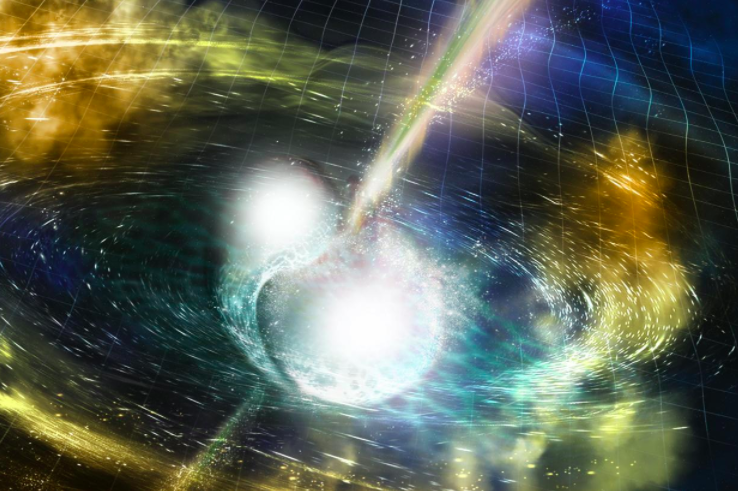 An artistu2019s illustration of two merging neutron stars. The rippling space-time grid represents gravitational waves that travel out from the collision, while the narrow beams show the bursts of gamma rays (Reuters Photo)
by Oct 16, 2017 12:00 am

"Truly a eureka moment," "Everything I ever hoped for," "A dream come true" -- Normally restrained scientists reached for the stars Monday to describe the feelings that accompany a "once-in-a-lifetime" event.

The trigger for this meteor shower of superlatives was the smashup of two unimaginably dense neutron stars 130 million years ago, when T-rex still lorded over our planet.

Evidence of this cosmic clash hurtled through space and reached Earth on Aug. 17 at exactly 12:41 GMT, setting in motion a secret, sleepless, weekslong blitzkrieg of star-gazing and number-crunching involving hundreds of telescopes and thousands of astronomers and astrophysicists around the world.

It was as if a dormant network of super-spies simultaneously sprung into action.

The stellar smashup made itself known in two ways: it created ripples called gravitational waves in Einstein's time-space continuum, and lit up the entire electromagnetic spectrum of light, from gamma rays to radio waves.

Scientists had detected gravitational waves four times before, a feat acknowledged with a Nobel Physics Prize earlier this month.

But each of those events, generated by the collision of black holes, lasted just a few seconds, and remained invisible to Earth- and space-based telescopes.

The neutron star collision was different.

It generated gravitational waves -- picked up by two US-based observatories known as LIGO, and another one in Italy called Virgo -- that lasted an astounding 100 seconds. Less than two seconds later, a NASA satellite recorded a burst of gamma rays.

This set off a mad dash to locate what was almost certainly the single source for both.

"It is the first time that we've observed a cataclysmic astrophysical event in both gravitational and electromagnetic waves," said LIGO executive director David Reitze, a professor at the California Institute of Technology (Caltech) in Pasadena

Initial calculations had narrowed the zone to a patch of sky in the Southern Hemisphere spanning five or six galaxies, but frustrated astronomers had to wait for nightfall to continue the search.

Finally, at around 2200 GMT, a telescope array in the northern desert of Chile nailed it: the stellar merger had taken place in a galaxy known as NGC 4993.

Stephen Smartt, who led observations for the European Space Observatory's New Technology Telescope, was gobsmacked when the spectrum lit up his screens. "I had never seen anything like it," he recalled.

"This event was truly a eureka moment," said Bangalore Sathyaprakash, head of the Gravitational Physics Group at Cardiff University. "The 12 hours that followed are inarguably the most exciting of my scientific life."

"There are rare occasions when a scientist has the chance to witness a new era at its beginning -- this is one such time," said Elena Pian, an astronomer at the National Institute for Astrophysics in Rome.

LIGO-affiliated astronomers at Caltech had spent decades preparing for the off chance -- calculated at 80,000-to-one odds -- of witnessing a neutron star merger.

"On that morning, all of our dreams came true," said Alan Weinstein, head of astrophysical data analysis for LIGO at Caltech.

"This discovery was everything I always hoped for, packed into a single event," added Francesco Pannarale, an astrophysicist at Cardiff University in Wales.

For these and thousands of other scientists, GW170817 -- the neutron star burst's tag -- will become a "do you remember where you were?" kind of moment.

"I was sitting in my dentist's chair when I got the text message," said Benoit Mours, an astrophysicist at France's National Centre for Research and the French coordinator for Virgo. "I jumped up and rushed to my lab."

Patrick Sutton, head of the gravitational physics group at Cardiff and a member of the LIGO team, was stuck on a long-haul bus, struggling to download hundreds of emails crowding his inbox.

Rumours swirled within and beyond the astronomy community as scientists hastened to prepare initial findings for publication Monday in a dozen articles spread across several of the world's leading journals.

"There have been quite a few pints and glasses of wine or bubbly -- privately, of course, because we haven't been allowed to tell anyone," Sutton told AFP.

But he couldn't resist telling his 12-year-old son, an aspiring physicist.

"He's sworn to secrecy though. He's not allowed to tell his friends."