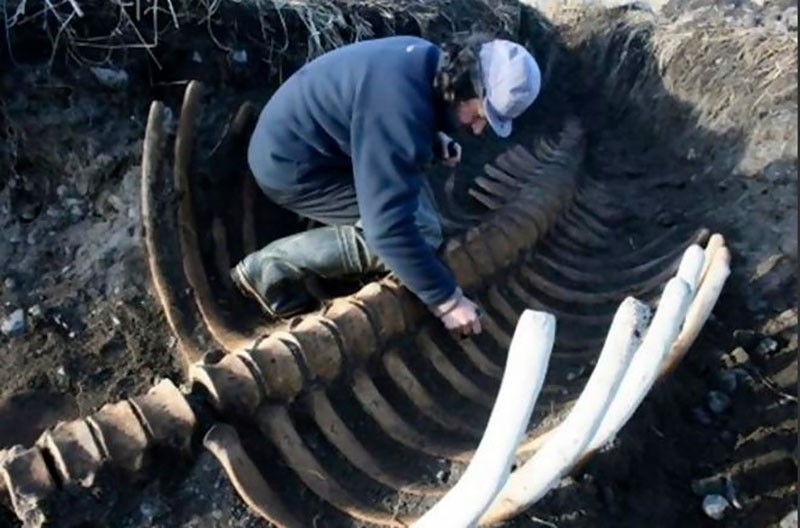 The massive skeleton of an extinct sea mammal was uncovered and identified on Russia's far eastern coastline, the Russian nature ministry announced Friday.

The 5.2-meter specimen, missing only its skull and a few other bones, belonged to a Steller's sea cow, a species that died out in the late 18th century.

Local officials spotted what appeared to be a "fence" of bones sticking up through the sand of the beach on one of the Commander Islands in Russia's Kamchatka region during a routine survey.

A four-hour dig by eight people uncovered the creature's skeleton, which had been hidden under just a meter of sand, and allowed it to be identified, according to the Ministry of Natural Resources and Ecology.

The skeleton included 27 ribs, 45 vertebrae, a left scapula and other bones. Its age has not yet been determined.

The nature reserve where the skeleton was found posted pictures on its website and said the skeleton will be on display at its visitor center.

The last reported discovery of the species' remains occurred in 1987 on the same island.

Steller's sea cows lived during the Pleistocene epoch, between 11,700 to 2.6 million years ago. Their large mass—up to 10 metric tons—allowed the mammals to survive in arctic conditions.

Only decades after being discovered by Artic explorers, the species went extinct due to overhunting, leaving behind only smaller relatives such as the manatee and dugong. The mammal became the namesake of Georg W. Steller, the German explorer who first documented the species in 1741. At the time of discovery, only about 2,000 of the sea cows were living.