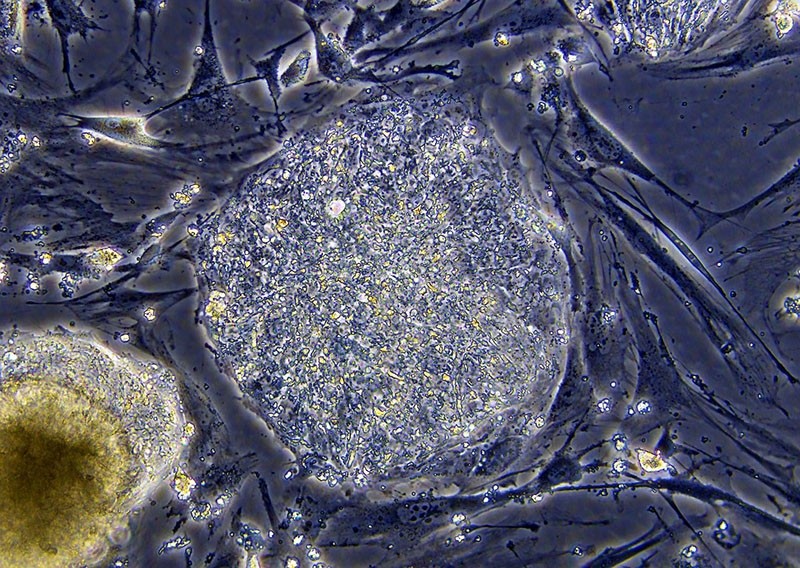 Microscopic 20x view of a colony of undifferentiated human embryonic stems cells. (University of Wisconsin-Madison Photo)
by Jan 09, 2018 12:00 am

Working human muscle has been grown from stem cells in the lab in a breakthrough that holds promise for sufferers of degenerative muscular diseases, scientists said Tuesday.

The team from Duke University in North Carolina said they were the first to achieve this feat using adult skin or blood cells which were "reprogramed" into a juvenile, versatile state.

These are called "induced pluripotent stem cells" or iPSCs. Like naturally-occurring stem cells found in embryos, they can become any other type of human cell.

In this case, the iPSCs were coaxed into becoming skeletal muscle cells, which grew into "functioning human skeletal muscle," the team reported in the science journal Nature Communications.

The breakthrough was made possible by "unique cell culture conditions" in the lab, and a special 3-D scaffold which allowed the cells to grow "much faster and longer" than other teams had managed, he said in a statement issued by the university.

The tissue contracted and reacted to external stimuli such as electrical pulses or chemical signals, the team said.

They also implanted the muscle fibers into adult mice, where it survived and functioned for at least three weeks, though it was "not as strong" as natural tissue.

The team hopes their technique will allow scientists to grow "an endless amount" of functioning muscle in the lab on which to test drugs and gene treatments for degenerative muscle diseases.

"The prospect of studying rare diseases is especially exciting for us," said researcher Nenad Bursac.

"When a child's muscles are already withering away from something like Duchenne muscular dystrophy, it would not be ethical to take muscle samples from them and do further damage."

The achievement represents an advance on previous work by the same team, which earlier reported the first functioning human muscle tissue grown from cells obtained in muscle biopsies.