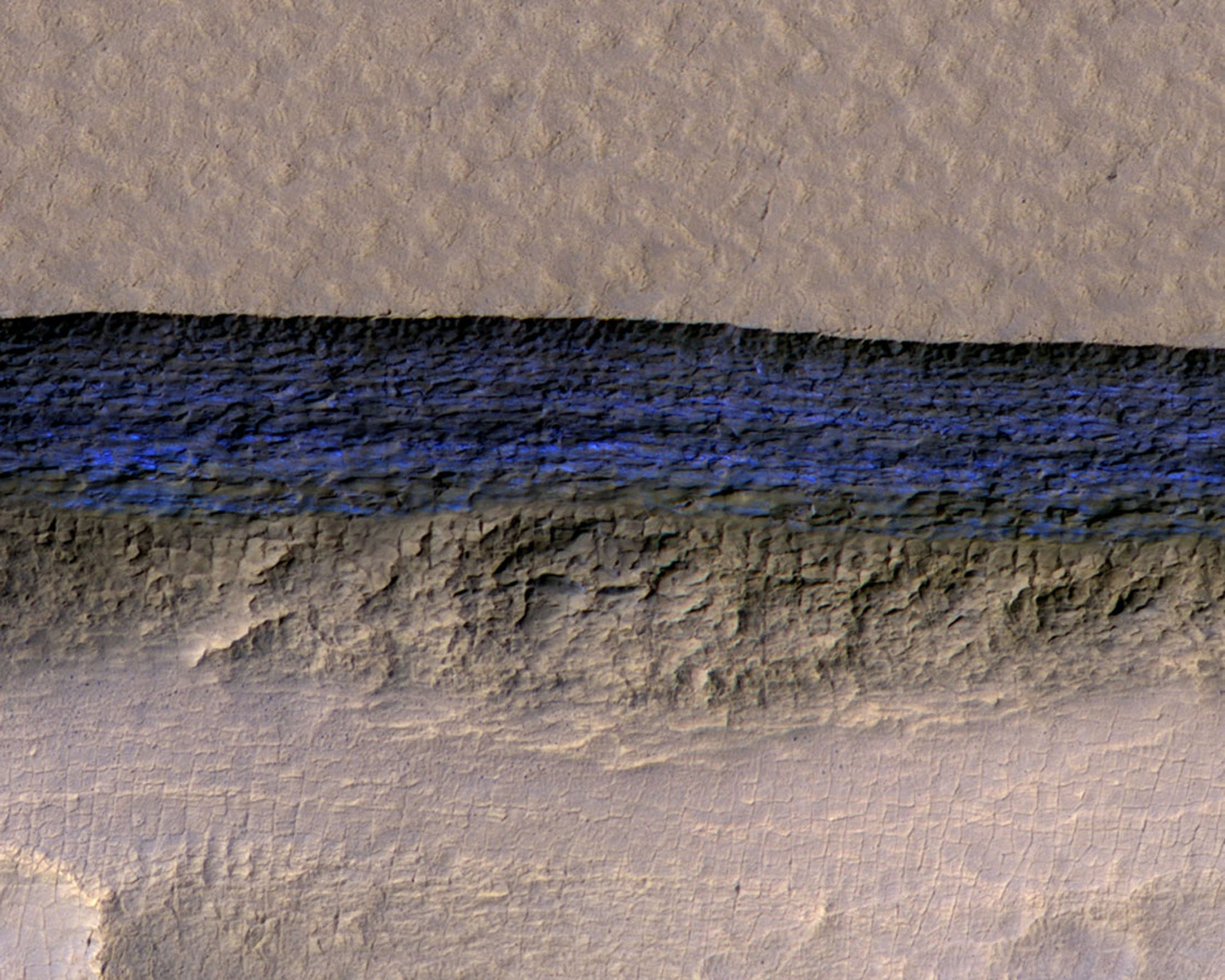 A cross-section of a thick sheet of underground ice is exposed at the steep slope that appears bright blue in this enhanced-color view of Mars from the HiRISE camera on NASA's Mars Reconnaissance Orbiter on January 11, 2018. (REUTERS Photo)
by Daily Sabah with Agencies Jan 12, 2018 12:00 am

Scientists have discovered ice masses that could potentially provide clean drinkable water for its future visitors, and have found it hidden just below the surface of Mars.

In an article published in Science Magazine on Thursday, research geologist Colin Dundas of the U.S. Geological Survey's Astrogeology Science Center in Flagstaff, Arizona said that the discovered masses which start from just below the surface were found to be up to 100 meters thick, steeply sloped and mostly composed of water ice.

Using NASA's Mars Reconnaissance Orbiter (MRO), which has studied the Martian atmosphere and terrain since 2006, researchers found eight of these geological features called scraps, and saw that they also had very distinct layers which could offer clues about Mars' past climate.

These previously undetected sheets of ice were exposed after erosion, Dundas, the lead researcher of the study, said.

"Below the surface of Mars, there is a substantial amount of ice deposits, however we don't have enough information on how clean, drinkable, or usable they are. We also need more data regarding the shapes, size and how deep these blocks are," he said.

This discovery is important in regards to travels to Mars, whether temporary or permanent, and also very crucial for the future of drinking water, growing crops and turning water into hydrogen fuel, the researcher added.

While scientists already knew that about a third of the surface of Mars contains shallow ground ice and that its poles harbor major ice deposits, the research reveals such big amounts of hidden ice for the first time.

"It was surprising to find ice exposed at the surface at these places. In the mid-latitudes, it's normally covered by a blanket of dust or regolith," loose bits of rock atop a layer of bedrock, said Dundas,

The latitudes were the equivalent on Earth of Scotland or the tip of South America.

Evidence of water on Mars dates back to the 'Mariner 9' mission in 1971. Also in 2016, scientists assessed evidence of one ice deposit around the middle latitudes of the Red Planet using a radar aboard a NASA spacecraft orbiting Mars, which holds as much water as Lake Superior.

Much more research is needed and there is still time to discover the reservoirs of Mars before humans dive in to the depths of space. According to scientists' predictions, arrivals on Mars are not expected until 2030.