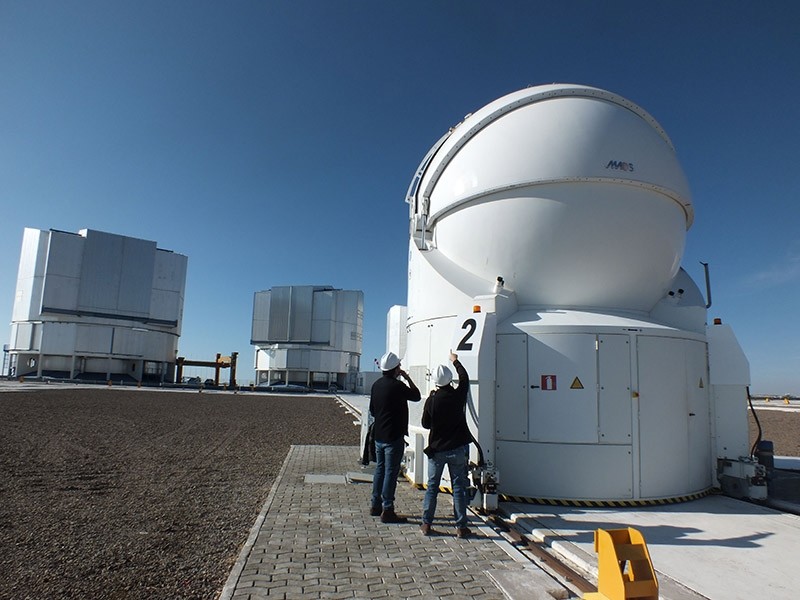 In the world's driest desert, an unassuming black box called "Espresso" is about to begin a very big mission: scouring the universe for planets like ours to find signs of life beyond Earth.

Espresso, an instrument known as a spectrograph, has a humble appearance that belies its cutting-edge technology: it is the most precise instrument of its kind ever built, 10 times stronger than its most powerful predecessor.

In the Atacama desert, in northern Chile, Espresso will be hooked up to four telescopes so big that scientists simply named them the Very Large Telescope, or VLT. Together, they will search the skies for exoplanets -- those outside our own solar system -- looking for ones that are similar to Earth.

The Atacama is a particularly good place for this kind of exploration. Its skies are completely cloudless most of the year, which is why the highly respected European Southern Observatory, which runs the VLT program, set up shop there in the first place.

In fact, many of the world's major telescopes are located in the area. By 2020, the Atacama is expected to be home to about 70 percent of the world's astronomy infrastructure.

It will analyze the light of the stars observed by the VLT, enabling it to determine whether planets orbit around them, and important information about those planets themselves: what their atmosphere is like, whether they have oxygen, nitrogen and carbon dioxide, and whether there is water -- all essential for supporting life.

"Espresso will be available on all four telescopes at once, which is something that had never been done before. That means the likelihood of finding planets similar to Earth in mass and size, or the conditions for life, are greater," said Italian astronomer Gaspare Lo Curto. 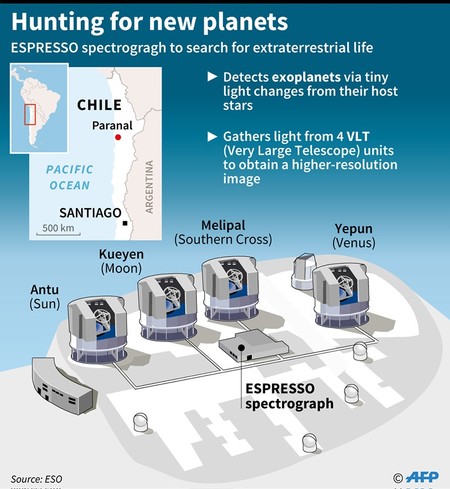 HARPS is also located in the Atacama, at the La Silla observatory, but is hooked up to telescopes less powerful than the VLT.

"Espresso will be 10 times more precise than the most precise instrument in the world, HARPS, and will also have the flexibility of serving each of the telescopes at the Paranal observatory," where the VLT program is housed, said Lo Curto.

Espresso "will help us answer one of the greatest questions we have in astronomy, which is analyzing and understanding planets outside our solar system," he told AFP.

The new spectrograph is housed inside a giant metal cylinder chilled to an average temperature of -150 C (-238 F) -- essential for its delicate optical instruments to do their work.

It was installed early last year beneath the base of the VLT, which is perched atop the 2,600-meter (2,844 yards) altitude Paranal mountain.

Espresso is currently in testing phase. But in 10 months' time it will officially begin its big mission -- which is also a solitary one.

To keep it cold enough and protect its instruments, astronomers will have it under lock and key in a giant underground room where no one will be allowed to enter for at least 10 years.